This paper examines the ThinkSystem SR950 memory decisions that need to be made when configuring the system or adding memory options. The key decision includes understanding the different memory types, and balancing the system memory across the server.

Because of these factors, it very important to understand the memory choices and build the most optimal memory configuration for your SR950 server.

The Lenovo ThinkSystem SR950 uses Lenovo TruDDR4 memory operating at up to 2666 MHz. The server supports 12 DIMMs per processor, which corresponds to 48 DIMMs with four processors installed and 96 DIMMs when eight processors are installed. Each processor has six memory channels with two DIMMs per channel. With 128 GB 3DS RDIMMs installed, an 8-socket server supports a total of 12 TB of system memory.

All DIMMs operate at a speed of 2666 MHz, both at 1 DIMM per channel and 2 DIMMs per channel. However, if the processor selected has a lower memory bus speed (eg 2400 MHz), the DIMMs will operate at that lower speed. For the SR950, only the Gold 51xx Scalable Family CPUs operate at the lower 2400 MHz speeds 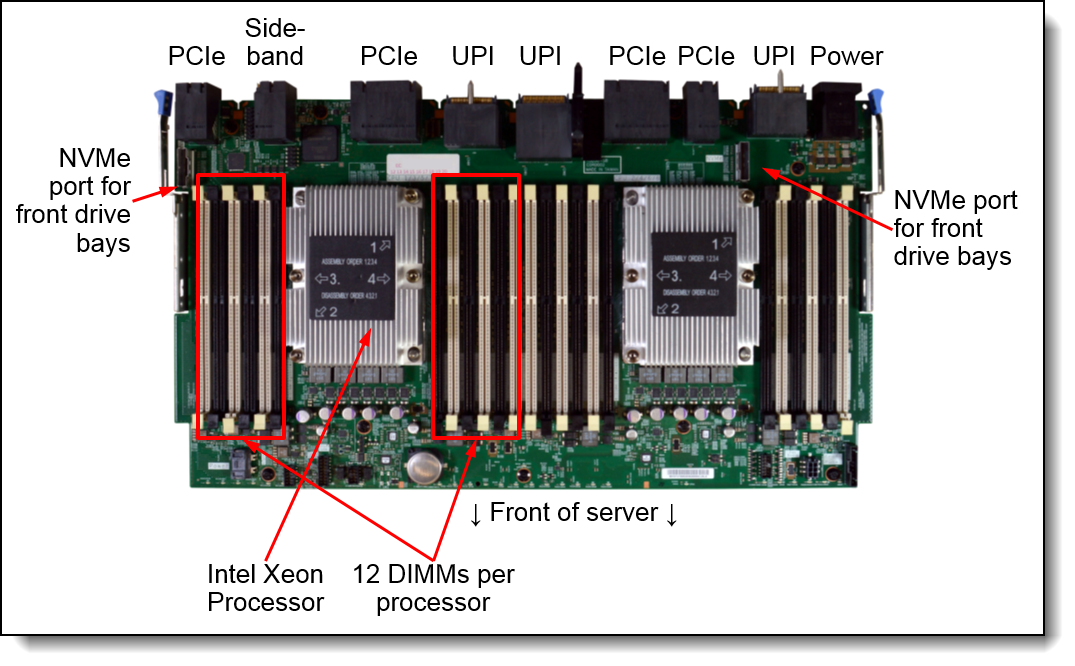 Figure 2. Compute system board with 2 processors and 24 total DIMMs

Lenovo TruDDR4 memory uses the highest quality components that are sourced from Tier 1 DRAM suppliers and only memory that meets the strict requirements of Lenovo is selected. It is compatibility tested and tuned to maximize performance and reliability. From a service and support standpoint, Lenovo TruDDR4 memory automatically assumes the system warranty, and Lenovo provides service and support worldwide.

The following rules apply when selecting the memory configuration:

Choosing one Type of DIMM over the other

Hitting your exact desired system memory level might limit your DIMM choices but in some cases you can choose between two and three different DIMMs to meet the requirements.

Choosing between the two types of 16GB DIMMs

To hit a certain memory level and allow for memory growth, it might make sense to populate the SR950 with larger DIMM sizes instead of filling up the server with smaller DIMMs. This way you have empty DIMM slots allowing expansion. A 4S example would be using 24x 32GB DIMMs instead of using 48x 16GB DIMMs for a 768 GB total system memory.

The 128 GB DIMM is a 3DS RDIMM. 3DS (three dimensional stacking) is a relatively new technology which stacks DRAM components vertically and allows for greater capacity DIMMs while not increasing the load on the memory bus.

The cost of the different memory options should also be taken into consideration:

A single 128GB DIMM is currently quite a bit more expensive than two 64GB DIMMs but cost on 128GB DIMM will decrease as adoption of this new DIMM increases.

The following figure shows the 16 GB and 64 GB DIMMs.

Configuring a server with balanced memory is important for maximizing its memory bandwidth and overall performance. The SR950 has six memory channels per processor and up to two DIMMs per channel, so it is important to understand what is considered a balanced configuration and what is not.

Balanced memory configurations enable optimal interleaving across all attached memory channels so memory bandwidth is maximized. Bandwidth can be optimized if both memory channels on the same physical processor socket are identically configured. System level memory performance can be further optimized if each physical processor socket has the same physical memory capacity.

The basic guidelines for a balanced memory subsystem are as follows:

If the SR950 requires a specific memory capacity, sometimes smaller DIMMs or a mix of DIMM sizes are needed to produce a balanced memory configuration.

Overall server performance is affected by the memory subsystem which can provide both high memory bandwidth and low memory access latency when properly configured. Balancing memory across the memory channels and CPUs produces memory configurations which can efficiently interleave memory references among its DIMMs producing the highest possible memory bandwidth.

The best way to ensure a balanced memory configuration that meets your capacity and upgrade requirements, use the Memory Wizard as described in the Lenovo Memory Configurator section below.

Examples of Balanced Memory configurations for each processor: 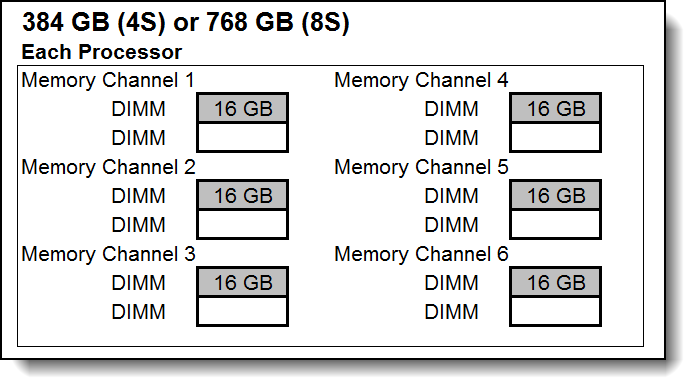 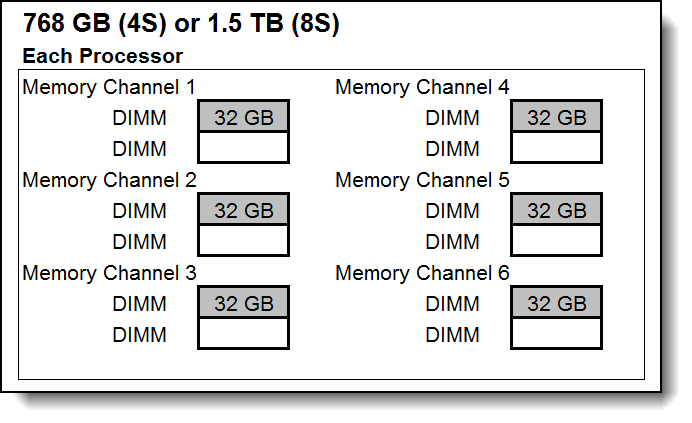 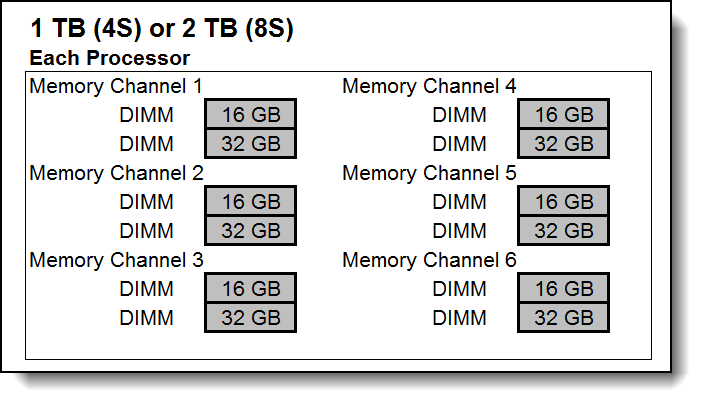 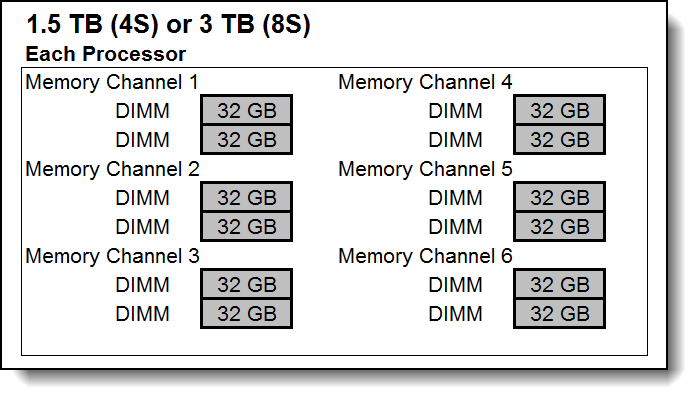 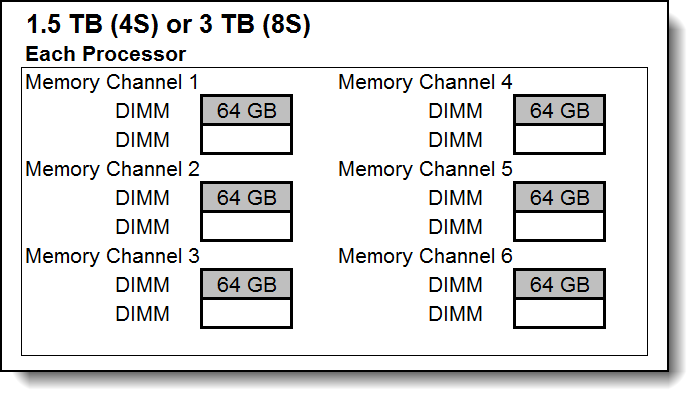 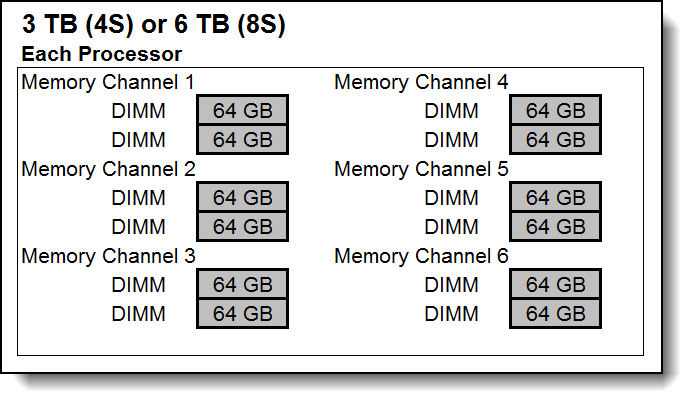 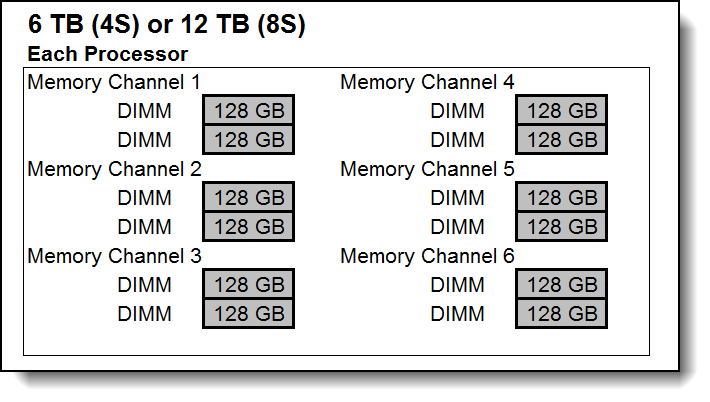 If memory rank sparing is used, then a minimum of two single-rank or dual-rank DIMMs must be installed per populated channel (the DIMMs do not need to be identical). In rank sparing mode, one rank of a DIMM in each populated channel is reserved as spare memory. The largest rank in the channel will be automatically selected as the spare rank. The amount of memory available to the operating system depends on the number, capacity and rank counts of the DIMMs installed.

The XClarity Provisioning Manager application embedded in the Unified Extensible Firmware Interface (UEFI) of the SR950 can if requested, force memory to a speed lower than the maximum speed determined by the processor and the memory subsystem. Memory speed might be set lower to save energy in environments with little memory performance sensitivity

Memory speed options are as follows:

The user can provide the amount of memory required and how they would like to optimize based on performance or by price. The memory configuration tool will then calculate the amount of DIMMs required as well as the location of the DIMMs based on the users input.

To use the tool to configure SR950 memory, do the following:

The tool provides an export function to save the selected configuration to an XLS spreadsheet and an XML file for use in the LESC system configurator.

For further reading, see these resources:

This article is one in a series on the ThinkSystem SR950 and SR850 servers:

The following terms are trademarks of Lenovo in the United States, other countries, or both:
Lenovo®
ThinkAgile
ThinkSystem
TruDDR4
XClarity®

Microsoft® and SQL Server® are trademarks of Microsoft Corporation in the United States, other countries, or both.