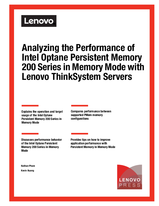 Intel Optane Persistent Memory 200 Series supports two modes, Memory Mode and App Direct Mode. In Memory Mode, the regular DRAM system memory acts as the next level cache, and the PMem becomes the system main memory. This enables the system to have higher system memory capacity and/or lower TCO. It doesn’t require any changes to applications.

This performance brief is for customers, business partners and sellers who wish to have a better understanding on the performance behavior and to learn how to better configure the memory subsystem for performance with Intel Optane Persistent Memory 200 Series in Memory Mode. It is expected that the reader will have a basic understanding on system memory hierarchy, data cache operations, and memory performance.