This article was initially created by Krishna Yalamanchi, Cloud Solution Architect at Intel. His blog can be found here.

In this article, we want to highlight new performance metrics for Intel Optane PMem 200 series that bring greater value to customers' applications and workloads.

To interpret the results of the SAP BWH Benchmark, let's look at each of the 3 phases:

A common metric to measure performance/price is Cost Per Terabyte for SAP HANA systems.

From the results, the Intel Optane PMem 200 series (Config 2 above) has 34% lower Cost Per Terabyte compared to an all DRAM system (Config 3).

Prowess Consulting performed a TCO analysis for Lenovo ThinkSystem SE650 V2 and SE860 V2 servers with 3rd Generation Intel Xeon Scalable Processors and Intel Optane PMem 200 Series against competitive offerings from Dell and HPE. The configurations varied from 4 TB to 9 TB with DRAM/PMem ratios of 1:1 and 1:2. The study compared both the CapEx to acquire systems in addition to the OpEx associated with running those solutions over a three-year period.

In addition to highlighting the TCO benefits of Lenovo's highly reliable and high performance systems, the study also showed the TCO differences between Intel Optane PMem 100 and 200 series when the competitor did not have a system with 3rd Generation Intel Xeon Scalable processors. 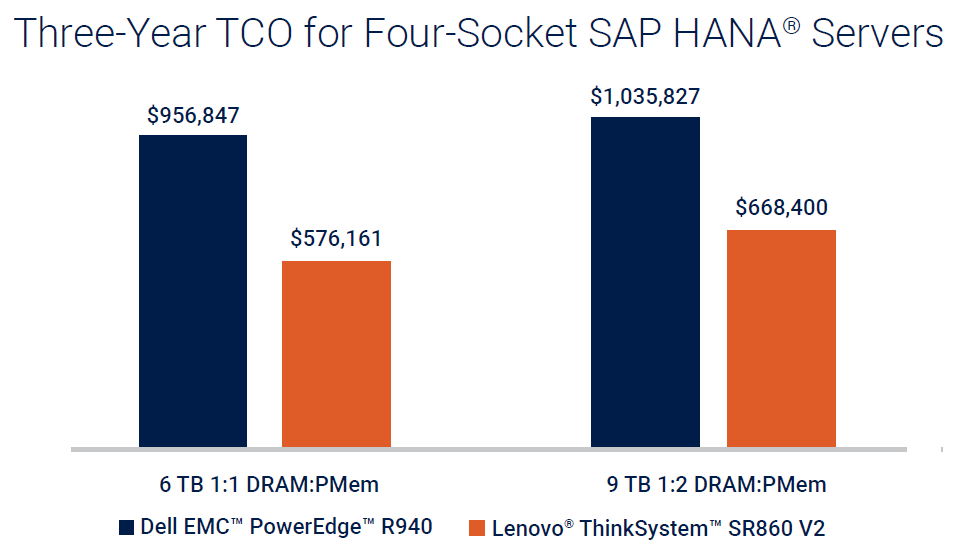 The greatest expense in the 3-year comparison was the compute cost, where Lenovo had a slight advantage over the competition. Where Lenovo shined, though, was in server reliability. For eight years in a row, Lenovo has led the industry in x86 server reliability according to ITIC with the least amount of unplanned downtime.

Conclusion: The benefits are measurable

Lenovo systems with 3rd Generation Intel Xeon Scalable Processors and Intel Optane PMem 200 Series provide many benefits to customers. The combination provides double the performance (over the previous generation) for Phase 1 and Phase 2 of the SAP BWH benchmarks – reaching 99.4% of the performance of systems with all DRAM. And with the increased memory density of the Intel Optane PMem 200 series, Lenovo 2-socket systems like the ThinkSystem SR650 V2 can support SAP HANA databases up to 6 TB and provide a 34% lower cost per terabyte compared to previous generation systems.

The following terms are trademarks of Lenovo in the United States, other countries, or both:
Lenovo®
ThinkSystem

Intel®, Intel Optane™, and Xeon® are trademarks of Intel Corporation or its subsidiaries.