The IBM System x3650 M3 provides outstanding performance for your mission-critical applications. Its energy-efficient design supports more cores, memory, and data capacity in a scalable 2U package that is easy to service and manage. With more computing power per watt and the latest Intel Xeon processors, you can reduce costs while maintaining speed and availability.

Replacement product: The System x3650 M3 server is withdrawn and no longer available for ordering. The current generation 2U two-socket rack-mount server is the Lenovo ThinkSystem SR650 V2, based on 3rd Gen Intel Xeon Scalable processors:

Option compatibility: The options tables shown in this product guide might not list withdrawn options that are compatible with the server. For a complete list of compatible options, refer to the ServerProven compatibility page for the x3650 M3 (7945):
https://static.lenovo.com/us/en/serverproven/xseries_old/7945.shtml

Operating system compatibility: For the most recent information about the supported operating systems and their specific versions and service levels, refer to the Operating System Interoperability Guide:
http://lenovopress.com/osig#servers=x3650-m3-7945.

The IBM® System x3650 M3 provides outstanding performance for your mission-critical applications. Its energy-efficient design supports more cores, memory, and data capacity in a scalable 2U package that is easy to service and manage. With more computing power per watt and the latest Intel Xeon processors, you can reduce costs while maintaining speed and availability.

The x3650 M3 offers a flexible, scalable design and simple upgrade path to 16 HDDs or SSDs plus an optical drive, and up to 288 GB of memory. In addition, a built-in altimeter provides more efficient power utilization and lower noise levels. Comprehensive systems management tools such as advanced diagnostics, a cable management arm, and the ability to control resources from a single point make it easy to deploy, integrate, service, and manage.

The challenge of a high-performance business is to do more with less—serve more Web pages, handle more secure connections, support more email users. You need to reduce the costs of doing business and improve the service you deliver to your customers while lowering your overall risk. The dual-socket IBM System x3650 M3 can reduce your costs with its new energy-smart design. It can improve service with reduced operational complexity and increased management functionality. It will lower your IT risk with the resiliency that comes from having no single point of failure. And like all IBM servers, the x3650 M3 offers you the trust that comes from IBM global reach, service, and support.

The x3650 M3 has the ability to grow with your application requirements with these features:

The System x3650 M3 has an energy-efficient design with features including the following:

Locations of key components and connectors

Figure 2 shows the front of the server. 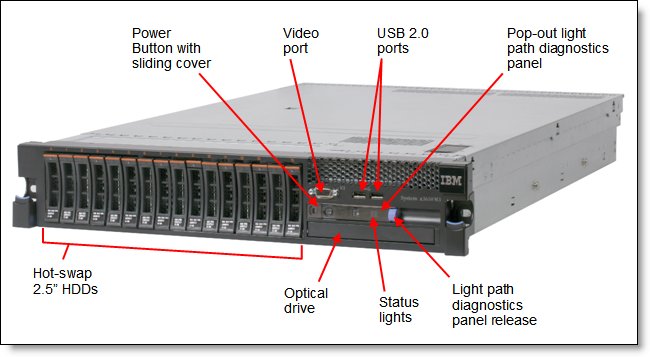 Figure 3 shows the rear of the server. 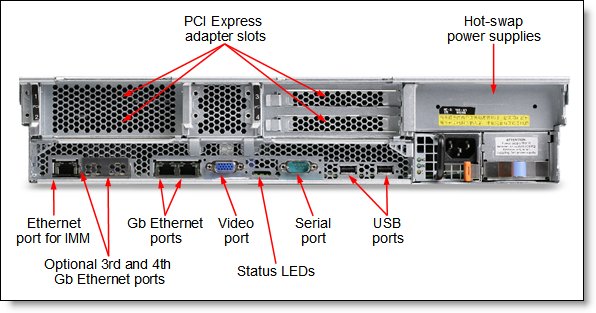 Figure 4 shows the locations of key components inside the server. 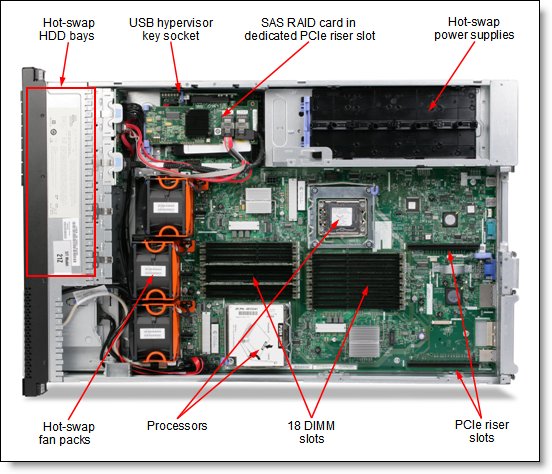 The x3650 M3 servers are shipped with the following items:

Refer to the Specifications section for information about standard features of the server.

Refer to the Specifications section for information about standard features of the server.

The x3650 M3 supports the processor options listed in the following table. The server supports up to two processors. This table shows which server models have each processor standard. If there is no corresponding where-used model for a particular processor then this processor is only available through CTO.

In the x3650 M3, two processors are standard and the server supports two maximum.

The IBM System x3650 M3 supports up to nine DDR3 DIMMs when one processor is installed and up to 18 DIMMs when two processors are installed. However, the maximum number of DIMMs is limited by the number of ranks in the DIMMs:

Maximum memory speed is limited by memory speed supported by the specific processor and by the number and type of DIMMs installed (whichever has a lower memory speed rating), as follows: 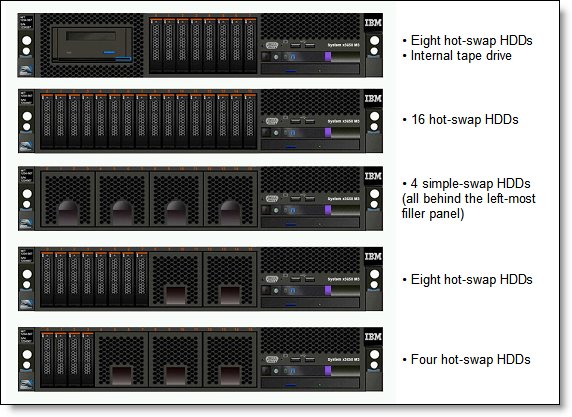 These options have the following descriptions:

The ServeRAID BR10il v2 SAS/SATA Controller has the following specifications:

The ServeRAID M1015 SAS/SATA Controller has the following specifications:

The ServeRAID M5014 SAS/SATA Controller has the following specifications:

The ServeRAID M5015 SAS/SATA Controller has the following specifications:

The ServeRAID B5015 SSD Controller has the following specifications:

The server supports the optical drive options listed in the following table.

The server supports up to four PCI Express slots with different riser cards installed into two riser sockets on the system planar (one riser socket supports installation of one riser card). The slot form factors are as follows:

You can replace each standard riser with one of the following risers (or configure one of these riser cards instead of the standard 2 x8 riser using special bid or CTO) :

* These options are CTO only

The server has an additional PCI Express slot dedicated to the RAID controller.

x3650 M3 supports up to four integrated Gigabit Ethernet ports. Two ports are standard, and two ports can be added by installing the optional Dual-port Gigabit Ethernet Daughter card, 46M1076. This card uses a dedicated connector on the motherboard and does not consume a PCI expansion slot. Integrated NICs have the following features:

The server supports the High IOPS SSD adapters listed in the following table.

* At least 1 power supply comes standard with every model

The server contains IBM Integrated Management Module (IMM), which provides advanced service-processor control, monitoring, and an alerting function. If an environmental condition exceeds a threshold or if a system component fails, the IMM lights LEDs to help you diagnose the problem, records the error in the event log, and alerts you to the problem. Optionally, the IMM also provides a virtual presence capability for remote server management capabilities.

See the IBM ServerProven® website for the latest information about the specific versions and service levels supported and any other prerequisites:
http://www.ibm.com/systems/info/x86servers/serverproven/compat/us/nos/matrix.shtml

The IBM System x3650 M3 has a 3-year onsite warranty with 9x5/next business day terms. IBM offers the warranty service upgrades through IBM ServicePacs, discussed in this section. The IBM ServicePac is a series of prepackaged warranty maintenance upgrades and post-warranty maintenance agreements with a well-defined scope of services, including service hours, response time, term of service, and service agreement terms and conditions.

In general, the types of IBM ServicePacs are as follows:

The external disk storage expansion enclosures listed in the following table are available.

The hard disk drives listed in the following table are supported with external expansion enclosures.

The RAID controllers listed in the following table are supported with external expansion enclosures.

† Only one key is supported in each controller, either the Advance Feature Key or the Performance Accelerator Key.

The ServeRAID M5025 SAS/SATA Controller has the following specifications:

The external SAS cables listed in the following table are supported with external expansion enclosures and M5025 RAID controllers.

* Note: The EXP3000 and EX2500 series can be chained with each other. In such a case, one cable is used to connect first EXP25xx or EXP3000 to the RAID controller, and every consecutive EXP unit is connected to previous one by one cable.

The following table lists the external storage systems that are supported by the server and can be ordered through System x sales channel. The server may support other IBM disk systems that are not listed in this table. Refer to IBM System Storage Interoperability Center for further information, http://www.ibm.com/systems/support/storage/ssic.

The server supports the external backup attachment options listed in the following table.

* Note: The external tape drives listed can be ordered through System x sales channel. Server may support other IBM tape drives that are not listed in this table. Refer to IBM System Storage Interoperability Center for further information.
† Note: These part numbers are the tape drives options for 35732UL and 35734UL.

The server supports the top-of-rack Ethernet switches from IBM System Networking listed in the following table.

The server supports attachments to the uninterruptible power supply (UPS) units listed in the following table.

The server supports attachments to the power distribution units (PDUs) listed in the following table.

The server supports the rack cabinets listed in the following table.

For more information, see the list of IBM Redbooks Product Guides in the Rack cabinets and options category:
http://www.redbooks.ibm.com/portals/systemx?Open&page=pg&cat=rack

The server supports the rack console switches and monitor kits listed in the following table.

For more information, see the list of IBM Redbooks Product Guides in the Rack cabinets and options category:
http://www.redbooks.ibm.com/portals/systemx?Open&page=pg&cat=rack

IBM Global Financing can help you obtain the IT solution you need while preserving funding for other strategic investments and optimizing cash flow. Our Fair Market Value (FMV) lease helps ensure that you have the latest IBM technology and with our mid-lease upgrade capability, you can increase the capacity of the system with little to no change in monthly payments. At the end of the lease, take advantage of our flexible end-of-lease options to fit your changing business needs. IBM Global Financing has the breadth and depth of offerings, longevity, proven success and global reach to help you develop a robust financing and asset management strategy that provides you the opportunity to leverage new technologies and turn your ambitious vision into a tangible solution.

Here are some other reasons why working with us makes solid financial sense:

Plus, we provide simple, easy-to-understand contracts and quick approvals. As the world’s largest IT financing provider, with an asset base of US$35.8 billion and over 125,000 customers, IBM Global Financing offers highly competitive rates that promote low total cost of ownership and low monthly payments.

IBM Global Financing operates in more than 50 countries. Go to http://ibm.com/financing for financing options in your country and to contact a local financing specialist.

IBM Global Financing offerings are provided through IBM Credit LLC in the United States and other IBM subsidiaries and divisions worldwide to qualified commercial and government clients. Rates and availability subject to client’s credit rating, financing terms, offering type, equipment and product type and options, and may vary by country. Non-hardware items must be one-time, non-recurring charges and are financed by means of loans. Other restrictions may apply. Rates and offerings are subject to change, extension or withdrawal without notice and may not be available in all countries. Please contact your local IBM Global Financing representative for additional detail.

For more information see these resources:

The following terms are trademarks of Lenovo in the United States, other countries, or both:
Lenovo®
BladeCenter®
Flex System
RackSwitch
ServeRAID
ServerGuide
ServerProven®
System x®
ThinkSystem