Withdrawn: All part numbers and feature codes are now withdrawn from marketing. The suggested replacement is the CN4054S 10Gb VFA5.2 Adapter.

Figure 1 shows the adapters (they have the same physical appearance).

This CN4054 is based on industry-standard PCIe architecture and offers the flexibility to operate as a Virtual NIC Fabric Adapter. Because this adapter supports up to 16 virtual NICs on a single quad-port Ethernet adapter, you see benefits in cost, power/cooling, and data center footprint by deploying less hardware. Compute nodes like the x240 support up to two of these adapters for a total of 32 virtual NICs per system.

The Flex System is a new category of computing that integrates multiple server architectures, networking, storage, and system management capability into a single system that is easy to deploy and manage. Flex System has full built-in virtualization support of servers, storage, and networking to speed provisioning and increased resiliency. In addition, it supports open industry standards, such as operating systems, networking and storage fabrics, virtualization, and system management protocols, to easily fit within existing and future data center environments. Flex System is scalable and extendable with multi-generation upgrades to protect and maximize IT investments.

Withdrawn: All part numbers and feature codes are now withdrawn from marketing.

** Adds FCoE and iSCSI functionality to CN4054 or CN4054R; One upgrade needed per adapter

The adapter part numbers include the following items:

The adapters have these features:

The following table lists the Flex System compute nodes that support the adapters.

See ServerProven at the following web address for the latest information about the expansion cards that are supported by each blade server type: http://www.lenovo.com/us/en/serverproven/flexsystem.shtml

I/O adapter cards are installed in the slot in supported servers, such as the x240, as highlighted in the following figure. 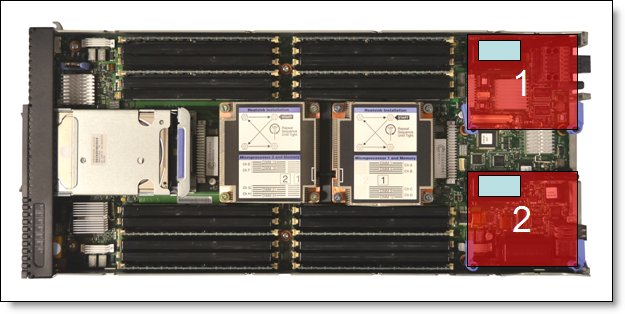 Some models of the x240 include a two-port Embedded 10Gb Virtual Fabric Adapter (VFA, also known as LAN on Motherboard or LOM) built into the system board:

Each x240 model that includes the embedded 10Gb VFA also has the Compute Node Fabric Connector installed in I/O connector 1 (and physically screwed onto the system board) to provide connectivity to the Enterprise Chassis midplane.

Table 3. Feature on Demand upgrade for FCoE and iSCSI support

To maximize the number of adapter ports usable, you may also need to order switch upgrades to enable additional ports as listed in the table. Alternatively, for CN4093, EN4093R, and SI4093 switches, you can use Flexible Port Mapping, a new feature of Networking OS 7.8, that allows you to minimize the number of upgrades needed. See the Product Guides for the switches for more details:
https://lenovopress.com/servers/blades/networkmodule

The table also specifies how many ports of the adapter are supported once the indicated upgrades are applied. Switches should be installed in pairs to maximize the number of ports enabled and to provide redundant network connections.

* This column indicates the number of adapter ports that will be active if indicated upgrades are installed.

The following table shows the connections between adapters installed in the compute nodes to the switch bays in the chassis. 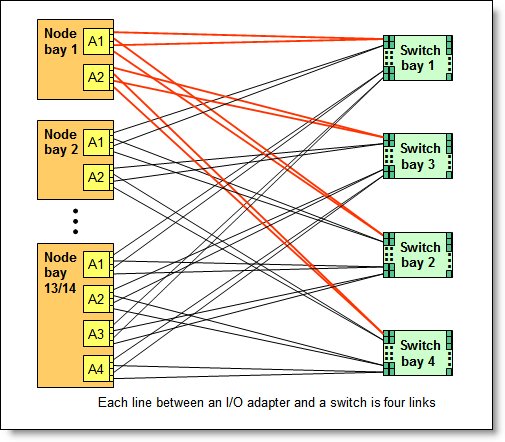 Figure 3. Logical layout of the interconnects between I/O adapters and I/O modules

Support for operating systems is based on the combination of the expansion card and the blade server on which it is installed. See the ServerProven website for the latest information about the specific versions and service packs supported. Select the blade server, and then select the expansion card to see the supported operating systems: http://www.lenovo.com/us/en/serverproven/flexsystem.shtml

There is a 1-year, customer-replaceable unit (CRU) limited warranty. When installed in a server, these adapters assume your system’s base warranty and any Lenovo warranty service upgrade purchased for the system.

The dimensions and weight of the adapter are as follows:

The adapter conforms to the following standards: 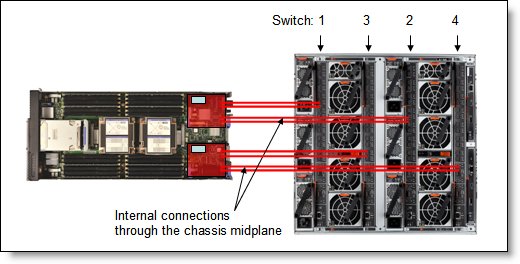 The following table lists the parts that are used in the configuration.

Table 6. Components used when connecting the adapter to the 10 GbE switches

For more information refer to the following resources:

The following terms are trademarks of Lenovo in the United States, other countries, or both:
Lenovo®
Flex System
ServerProven®
System x®
VMready®