The Lenovo ThinkServer RS140 is the ideal right-sized, value-priced, single-socket 1U rack solution for small and medium businesses that need optimized performance and flexibility for future growth. With support for a memory capacity of 32 GB and internal storage of 12 TB, the RS140 is ideal for small- to medium-sized business, workgroups, distributed locations, and webscale workloads.

Product availability: The ThinkServer RS140 server models are withdrawn and no longer available for ordering. For currently available 1U single-socket rack-mount servers, refer to the following product guides:

Changes in the March 21 update:

The Lenovo ThinkServer RS140 is the ideal right-sized, value-priced, single-socket 1U rack solution for small and medium businesses that need optimized performance and flexibility for future growth. With support for a memory capacity of 32 GB and internal storage of 12 TB, the RS140 is ideal for small- to medium-sized business, workgroups, distributed locations, and webscale workloads.

The RS140 runs a wide range of operating systems, including client OS capability for retail applications.

The RS140 is among the quietest server models in the industry.

The RS140 has just a 16.2-inch (411 mm) deep chassis and supports 4-post and 2-post racks, giving you more flexibility with your business footprint.

The ThinkServer RS140 server is a compact, cost-effective, single-processor 1U rack server that has been optimized to provide enterprise-class features to small-to-medium-sized businesses, retail stores, or distributed enterprises.

The RS140 provides many features to simplify serviceability and increase system uptime:

The RS140 offers the following energy-efficiency features to save energy, reduce operational costs, increase energy availability, and contribute to a green environment:

The following figure shows the front of the RS140.

The following figure shows the rear of the RS140.

The following figure shows the internal components of the RS140. 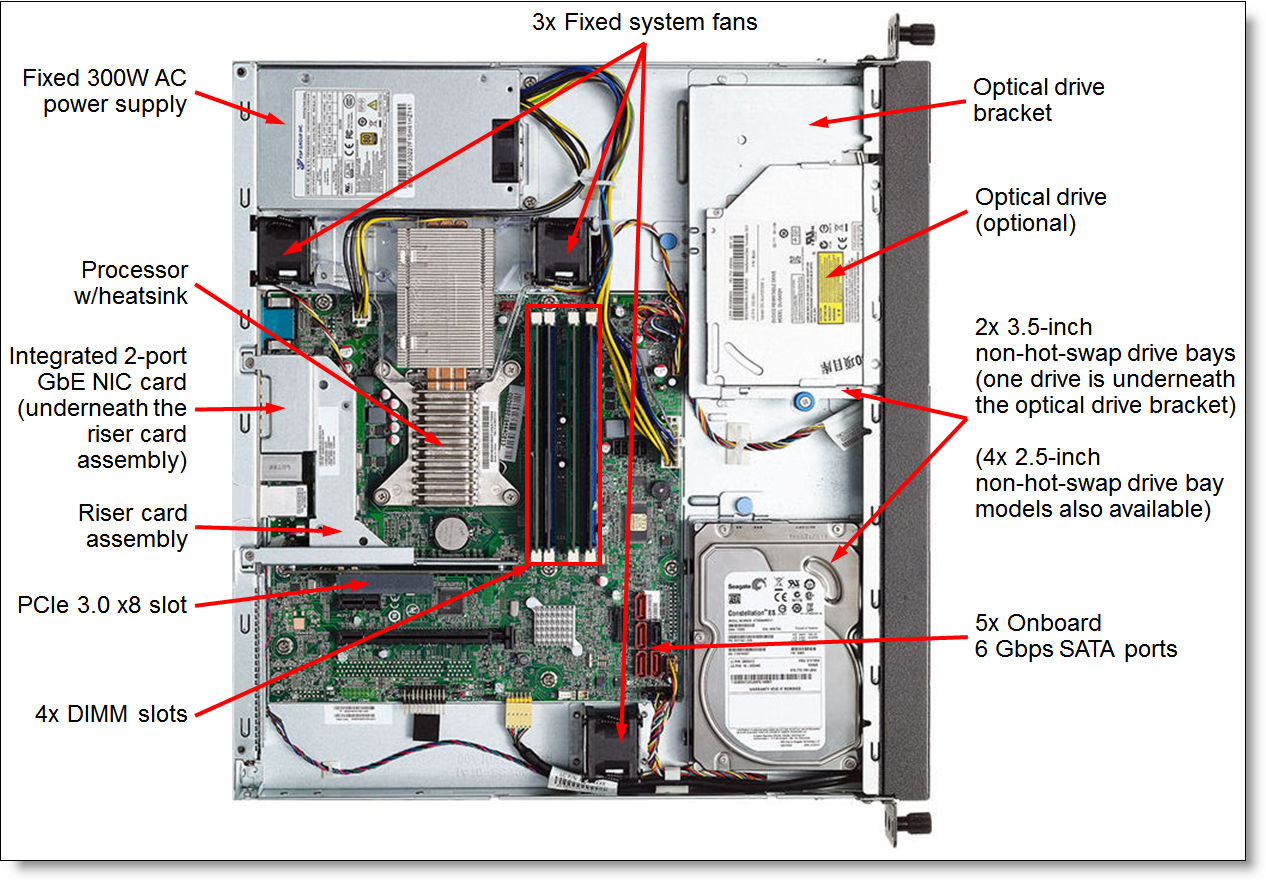 Product availability: TopSeller models of the ThinkServer RS140 listed in this section are withdrawn and no longer available for ordering.

The RS140 servers are shipped with the following items:

The RS140 supports one processor. The following table lists the specifications of the processors that are available for the RS140.

The RS140 server has four DIMM slots, and it supports DDR3 UDIMMs with ECC memory protection. The processor has two memory channels and supports two DIMMs per channel.

The following rules apply when selecting the memory configuration:

The following table summarizes memory speeds and capacities that are supported by the RS140 server.

The following table lists the memory options that are available for the RS140 server.

The following table lists the internal RAID controllers, HBAs, and the additional options that are used for the internal disk storage of the RS140 server.

ThinkServer RAID 100 is an onboard RAID controller that does not consume a PCIe slot. The RAID 500, RAID 700, and 8885e adapters are supported in the PCIe expansion slot.

The following table lists drive types and internal drive bay configurations that are supported by the internal RAID controllers and HBAs.

* Four internal ports are used for SATA HDDs or SSDs, and the remaining port is used for an optical drive.
** The adapter supports more than four drives, however, the maximum number of drives supported by the RS140 server is four.
*** In addition to eight internal ports listed in Table 8, the ThinkServer 8885e adapter has eight external ports for external storage expansion connectivity (For details, refer to the External storage expansion section).
# The RAID level 50 requires minimum 6 drives; therefore, RAID 50 is not supported on the RS140.

The RS140 server supports the drive options that are listed in the following table.

The RS140 server models that are listed in Table 2 come standard with the DVD-RW optical drive. If needed, an external USB optical drive can be ordered (see the following table).

The RS140 server has one PCIe 3.0 x8 (x8-wired) full-height, half-length expansion slot (Refer to Figure 4 for slot location). The following adapter types are supported in the PCIe slot:

The RS140 server supports the serial port adapter option listed in the following table to increase the number of available serial ports.

The integrated GbE ports have the following features:

Important: The onboard I217LM GbE port does not support VMware vSphere (ESXi).

The following table lists the network adapter options for the RS140 server.

Important: VMware ESXi support requires an Intel Xeon E3-1200 v3 processor and a PCIe RAID adapter. The onboard RAID 100 adapter and the shared GbE port (I217LM) are not supported by VMware ESXi.

For the latest information about the specific versions and service levels that are supported and any other prerequisites, see the Operating System Interoperability Guide: http://lenovopress.com/redposig.

Both AMT and ISM offer the following features:

Both AMT and ISM operate independently of the server and remain operational even if the server is powered off. Out-of-band management is performed through the Ethernet port 0, which is a shared port for data and management.

Lenovo offers the following software tools that can help you set up, use, and maintain the server at no additional cost:

The following table lists the rack installation options that are available for the RS140 server.

The RS140 has the following dimensions and weight (approximate):

The RS140 server is supported in the following environment:

Lenovo’s Priority Support Offering enhances our award-winning call center support to provide top priority queue assignment to specialized Lenovo technicians. Priority support accelerates call center troubleshooting to get your problems resolved quickly, and includes other value-added support for Lenovo provided software tools. Priority support can be purchased stand alone to match the base warranty of your system or in convenient bundles with our same-day response services.

Lenovo’s Keep Your Drive Multi-Drive service is a multi-drive hard drive retention offering that ensures your data is always under your control, regardless of the number of hard drives that are installed in your Lenovo server. In the unlikely event of a hard drive failure, you retain possession of your hard drive while Lenovo replaces the failed drive part. Your data stays safely on your premises, in your hands. Keep Your Drive Multi-Drive covers multiple drives and multiple failures with one service offering at one value price. This service can be purchased stand-alone to match the base warranty of your system or in convenient bundles with our same-day response services.

The RS140 server conforms to the following regulations:

The RS140 server can be connected to the Lenovo Storage drive enclosures by using supported RAID adapters and HBAs that are listed in the following table.

The following table lists the external drive enclosures that are offered by Lenovo that can be used with the RS140 for storage expansion.

The following table lists the top-of-rack Ethernet switches that are offered by Lenovo that can be used in RS140 solutions.

For more information, see the list of Product Guides in the Top-of-rack switches categories:

The following table lists the rack cabinets that are offered by Lenovo that can be used in RS140 solutions.

For more information, see the list of Product Guides in the Rack Cabinets category:
http://lenovopress.com/servers/options/racks

The following table lists the console switches and monitor kits that are available from Lenovo that can be used in RS140 solutions.

The following table lists the power distribution units (PDUs) that are offered by Lenovo that can be used in RS140 solutions.

The following table lists the uninterruptible power supply (UPS) units that are offered by Lenovo that can be used in RS140 solutions.

For more information, see the list of Product Guides in the UPS Units category:
http://lenovopress.com/servers/options/ups

For your region specific offers please ask your Lenovo sales representative or your technology provider about the use of Lenovo Financial Services. For more information, see the following Lenovo website:
http://www.lenovo.com/us/en/landingpage/lenovo-financial-services

The following terms are trademarks of Lenovo in the United States, other countries, or both:
Lenovo®
Lenovo Services
RackSwitch
ThinkPad®
ThinkServer®
ThinkSystem®
TopSeller