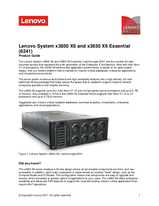 The Lenovo System x3850 X6 and x3850 X6 Essential, machine type 6241, are four-socket 4U rack-mounted servers that represent the sixth generation of the Enterprise X-Architecture. Now with Intel Xeon E7 v4 processors, the x3850 X6 delivers fast application performance, is based on an agile system design, and is a resilient platform that is needed for mission-critical databases, enterprise applications, and virtualized environments.

Changes in the November 18, 2016 update of the English version (Chinese version will be updated shortly):