Designed to enable maximum flexibility and reliability, the ThinkSystem DB610S FC SAN Switch is a compact 1U rack-mount switch that offers low-cost access to industry-leading Storage Area Network (SAN) technology while providing “pay-as-you-grow” scalability to meet the needs of an evolving storage environment.

This guide is intended for technical specialists, sales specialists, sales engineers, IT architects, and other IT professionals who want to learn more about the ThinkSystem DB610S FC SAN Switch and consider its use in IT solutions.

How customers use ThinkSystem DB610 S 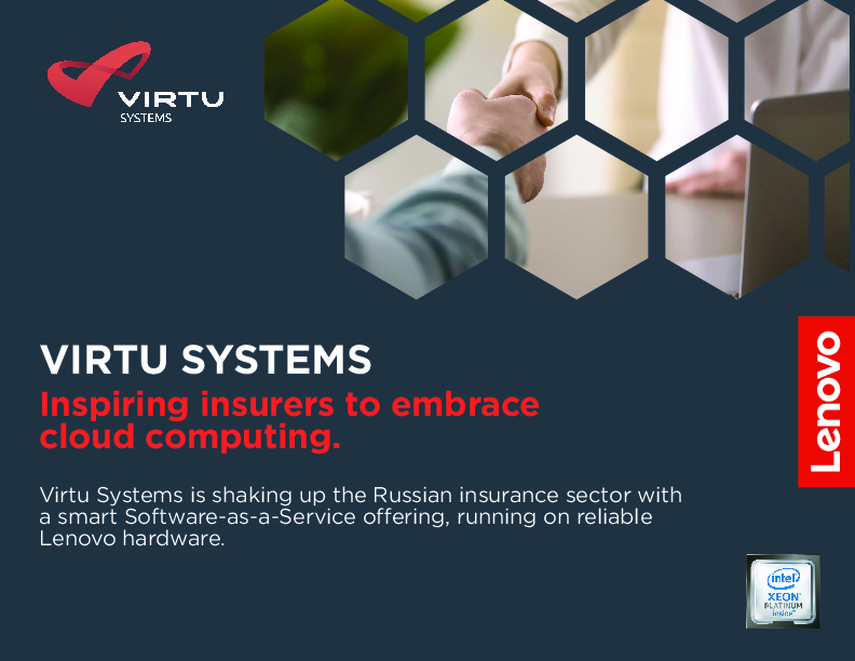 Virtu Systems is shaking up the Russian insurance sector with a smart Software-as-a-Service offering, running on reliable Lenovo hardware.

How customers use ThinkSystem DB610 S 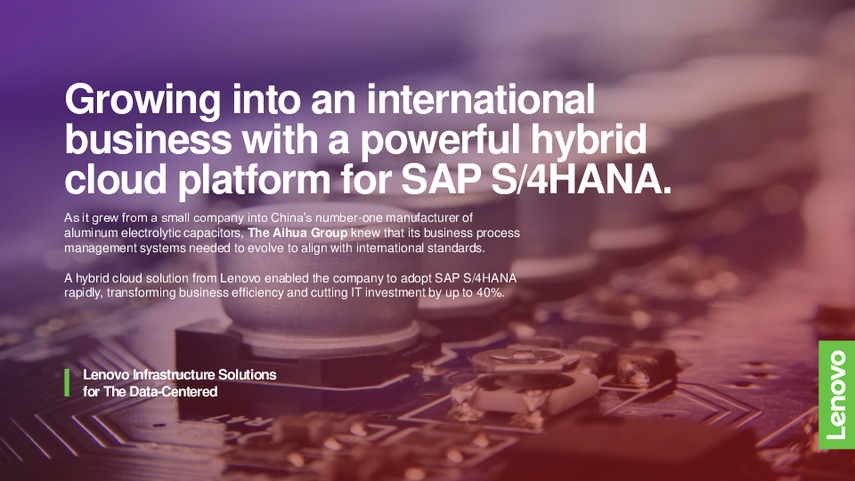 Growing into an international business with a powerful hybrid cloud platform for SAP S/4HANA:

As it grew from a small company into China’s number-one manufacturer of aluminum electrolytic capacitors, The Aihua Group knew that its business process management systems needed to evolve to align with international standards. A hybrid cloud solution from Lenovo enabled the company to adopt SAP S/4HANA rapidly, transforming business efficiency and cutting IT investment by up to 40%.

Designed to enable maximum flexibility and reliability, the ThinkSystem DB610S is a compact, 1U rack-mount FC switch that offers low-cost access to industry-leading Storage Area Network (SAN) technology while providing “pay-as-you-grow” scalability to meet the needs of an evolving storage environment.

The DB610S FC SAN Switch offers 24x SFP+ ports that support 4/8/16/32 Gbps speeds. The DB610S FC SAN switch provides easy integration into the existing SAN environments while realizing the benefits of Gen 6 Fibre Channel connectivity, and the switch offers a rich set of standard features with the options to expand its capabilities as needed.

Lenovo offers models of the DB610S with lifetime warranties which allows customers to get hardware support and access to FOS support until the end of life of the DB610S switch.

For details on the latest features supported with the DB610S FC SAN Switch see the Administration Guide for the latest available Fabric OS version 8.2 or 9.0 and above:
https://www.broadcom.com/products/fibre-channel-networking/software/fabric-operating-system.

The following figure shows the port-side view of the DB610S FC SAN Switch.

The following figure shows the non-port side view of the DB610S FC SAN Switch.

Note: The switch comes standard without a power cord; one power cable must be purchased together with the switch. See the Power supplies and cables section for details.

Firmware entitlement is included with the DB610S FC SAN Switch and provides lifetime, 3 years or 1 year of firmware support, depending on the model. See the Models section for specifics.

Firmware entitlements can be upgraded as follows:

The firmware entitlement and support extension options for Models HC1, HC2 and HC3 are listed in the following table.

The DB610S FC SAN Switch models ship with port licenses (port activations) and transceivers as listed in the following table.

For models without the full 24 ports activated, the remaining ports can be activated by purchasing and installing Ports on Demand (POD) licenses. Port licenses and transceiver bundles are sold in 8-port increments. The following table lists the ordering information. Some licenses include transceivers as indicated.

With the flexibility of the DB610S FC SAN Switch, customers can choose the following connectivity:

The DB610S FC SAN Switch models ship with 8x or 24x SWL transceivers as listed in the table in the Port activation licenses section. Additional SWL, LWL, and ELWL SFP+ transceivers can be ordered for the switch, if needed.

The following table lists the supported SFP+ options and cables.

Brocade secure transceivers: These new transceivers have features to ensure that you are using genuine Brocade components to maximize performance and reliability and to help avoid issues related to counterfeit products.

* When using ELW SFP+ transceivers over distances over 10 km, the Extended Fabric feature that is available in the Enterprise Bundle is required on a SAN switch to drive the maximum bandwidth over the extended links.

The following table lists the cabling requirements for the switch.

For other models, the Enterprise Bundle is an optional upgrade. Ordering details are listed in the following table. One license is needed per switch.

SANnav Management Portal is a next-generation SAN management application with a simple browser-based user interface (UI) and with a focus on streamlining common workflows, such as configuration, zoning, deployment, monitoring, troubleshooting, reporting, and analytics.

With SANnav Global View, administrators can quickly visualize the health, performance, and inventory of multiple SANnav Management Portal instances using a simple, intelligent dashboard and can easily navigate from a global view down to local environments to investigate points of interest. SANnav Global View is designed to manage up to 20 SANnav Management Portal instances.

The SANnav licenses are subscription-based with 1-year, 3-year, or 5-year software entitlement and support.

The SAN Switch supports the standards listed at the following web page:

The switch comes standard without a power cord; one rack power cable or line cord must be ordered together with the switch (see the following table).

* Available for factory-built custom configurations and solutions only.

The optional mid-mount rack kit for the DB610S FC SAN Switch is shown in the following figure. 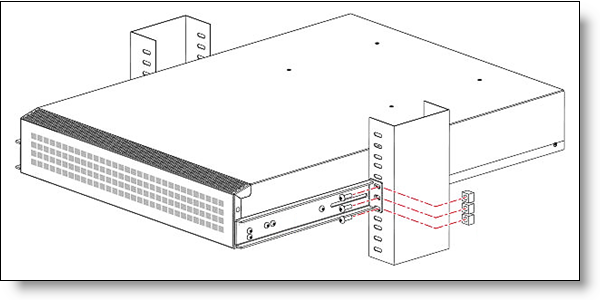 The DB610S FC SAN Switch has the following dimensions and weight (approximate):

The DB610S FC SAN Switch is supported in the following environment:

The DB610S FC SAN Switch has the following warranty term:

Note: For machine type 7D8P, the limited lifetime warranty is active until the SAN switch reaches its end of service date announced by Lenovo. Lenovo typically provides support for at least five years following the last order date of a product.

Lenovo Services is a dedicated partner to your success. Our goal is to reduce your capital outlays, mitigate your IT risks, and accelerate your time to productivity.

Note: Some service options may not be available in all markets or regions. For more information, go to https://www.lenovo.com/services. For information about Lenovo service upgrade offerings that are available in your region, contact your local Lenovo sales representative or business partner.

Here’s a more in-depth look at what we can do for you:

The DB610S FC SAN Switch conforms to the following regulations:

The following table lists the external backup options that are offered by Lenovo that can be used in Lenovo FC SAN solutions.

Note: Information provided in this section is for ordering reference purposes only. End-to-end LTO Ultrium configuration support for a particular tape backup unit must be verified through the System Storage Interoperation Center (SSIC):
http://www.ibm.com/systems/support/storage/ssic

For more information, see the list of Product Guides in the Tape Autoloaders and Libraries category:
https://lenovopress.com/storage/tape/library

For specifications about these racks, see the Lenovo Rack Cabinet Reference, available from:
https://lenovopress.com/lp1287-lenovo-rack-cabinet-reference

For more information, see the list of Product Guides in the Rack cabinets category:
https://lenovopress.com/servers/options/racks

The following terms are trademarks of Lenovo in the United States, other countries, or both:
Lenovo®
Lenovo Services
ThinkSystem®

Excel® and Microsoft® are trademarks of Microsoft Corporation in the United States, other countries, or both.