The Flex System™ x222 Compute Node is a high-density dual-server offering that is designed for virtualization, dense cloud deployments, and hosted clients. The x222 has two independent servers in one mechanical package, which means that the x222 has a double-density design that allows up to 28 servers to be housed in a single 10U Flex System Enterprise Chassis.

Withdrawn: The Flex System x222 is withdrawn from marketing.

The Flex System™ x222 Compute Node is a high-density dual-server offering that is designed for virtualization, dense cloud deployments, and hosted clients. The x222 has two independent servers in one mechanical package, which means that the x222 has a double-density design that allows up to 28 servers to be housed in a single 10U Flex System Enterprise Chassis.

Suggested use: For clients looking to virtualize their workloads while maximizing the density of their computing resources.

Flex System is a new category of computing that integrates multiple server architectures, networking, storage, and system management capability in to a single system that is easy to deploy and manage. Flex System has full and built-in virtualization support of servers, storage, and networking to speed provisioning and increased resiliency. In addition, it supports open industry standards, such as operating systems, networking and storage fabrics, virtualization, and system management protocols, to easily fit within existing and future data center environments. Flex System is scalable and extendable with multigenerational upgrades to protect and maximize IT investments.

The Flex System x222 Compute Node is a high-density offering that is designed to maximize the computing power that is available in the data center. With a balance between cost and system features, the x222 is an ideal platform for dense workloads, such as virtualization. This section describes the key features of the x222.

The x222 provides many features to simplify serviceability and increase system uptime:

The x222 offers the following energy-efficiency features to save energy, reduce operational costs, increase energy availability, and contribute to a green environment:

Locations of key components and connectors

The following figure shows the front of the server.

The following figure shows how the two servers connect together. 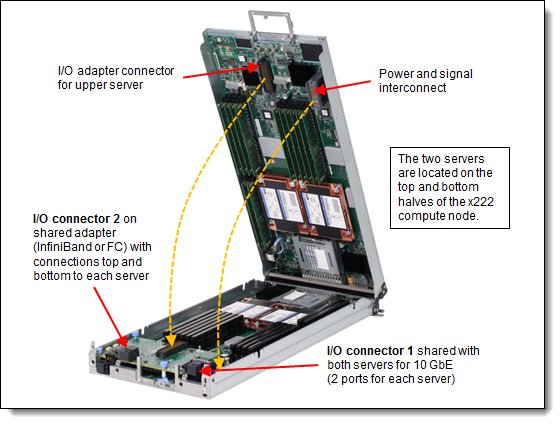 The following figure shows the locations of key components inside the upper server. 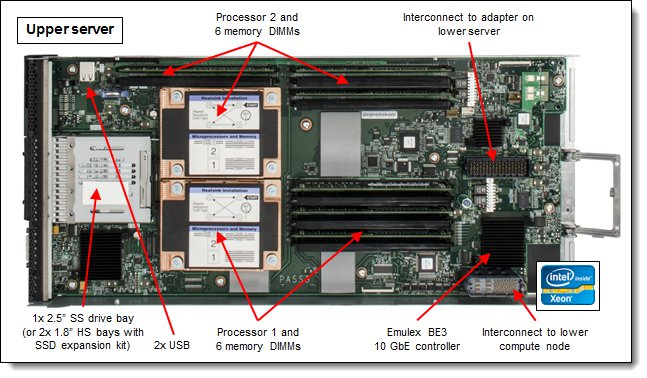 Figure 4. Inside view of the upper server

The following figure shows the locations of key components inside the lower server. 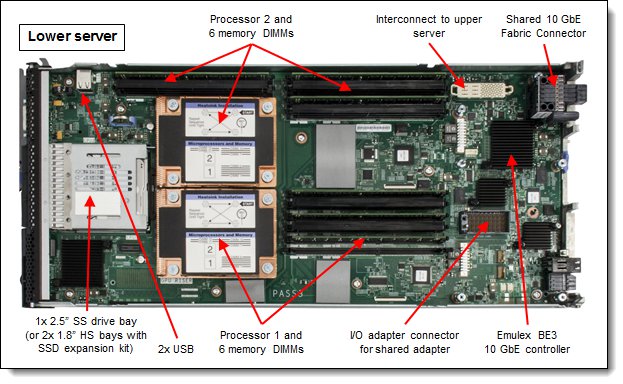 Figure 5. Inside view of the lower server

The x222 servers are shipped with the following items:

The following table lists the standard models. The components that are listed for each model are for the entire x222 (half for each server).

* The quantities here are for the entire x222 Compute Node, half for each server. For example, each x222 model ships with two processors as standard, one installed in each of the two servers.
** The 1600 MHz memory DIMMs that are standard in these models operate at most at 1333 MHz or 1066 MHz as indicated, matching the memory speed of the processor.
† Model H6x includes the Flex System IB6132D 2-port FDR InfiniBand Adapter.

The x222 is supported in the Flex System Enterprise Chassis.

The following table provides guidelines about what number of x222 Compute Nodes can be installed. For more guidance, use the Power Configurator, found at the following website:
http://ibm.com/systems/bladecenter/resources/powerconfig.html

Note: The two servers are independent and cannot be combined to form a single four-socket system.

The table also shows which server models have each processor as standard. If no corresponding where used model for a particular processor is listed, then this processor is available only through the configure-to-order (CTO) process.

The following rules apply when you select the memory configuration:

Note: The quantities and capacities are for one server (that is, half of the x222). The maximums for the entire x222 (both servers) is double these numbers.

If memory mirroring is used, then the DIMMs must be installed in pairs (minimum of one pair per processor), and both DIMMs in a pair must be identical in type and size.

The following table lists the memory options that are available for the x222. DIMMs can be installed one at a time in each server, but for performance reasons, install them in sets of three (one for each of the three memory channels).

The x222 has two 2.5-inch simple-swap drive bays that are accessible from the front of the unit (Figure 2), with one bay for each of the servers. Each server offers a 6 Gbps SATA controller that is implemented by the Intel C600 chipset. As of Flex System code base 1.3.2 (announced May 13, 2014), the ServeRAID C100 embedded RAID controller is enabled which provides firmware-based RAID capabilities.

The ServeRAID C100 is an integrated SATA controller with RAID capabilities. When enabled in a server in the x222 with two 1.8-inch SSDs, the RAID-1 feature of the C100 offers a cost-effective way to provide fault-tolerant disk subsystem management to help safeguard your valuable data and enhance availability.

The ServeRAID C100 has the following specifications:

* The quantities that are listed here are for each of the two servers in the x222.

Note: The USB port on the compute nodes supply up to 0.5 A at 5 V. For devices that require more power, an additional power source will be required.

Each server in the x222 includes an Embedded two-port 10Gb Virtual Fabric Adapter (VFA, also known as LAN on Motherboard or LOM) built in to the system board. The x222 has one Fabric Connector (which is physically on the lower server) and the Ethernet connections from both Embedded 10 Gb VFAs are routed through it. Figure 5 shows the physical location of the Fabric Connector.

The following figure shows the internal connections between the Embedded 10Gb VFAs and the switches in chassis bays 1 and 2. 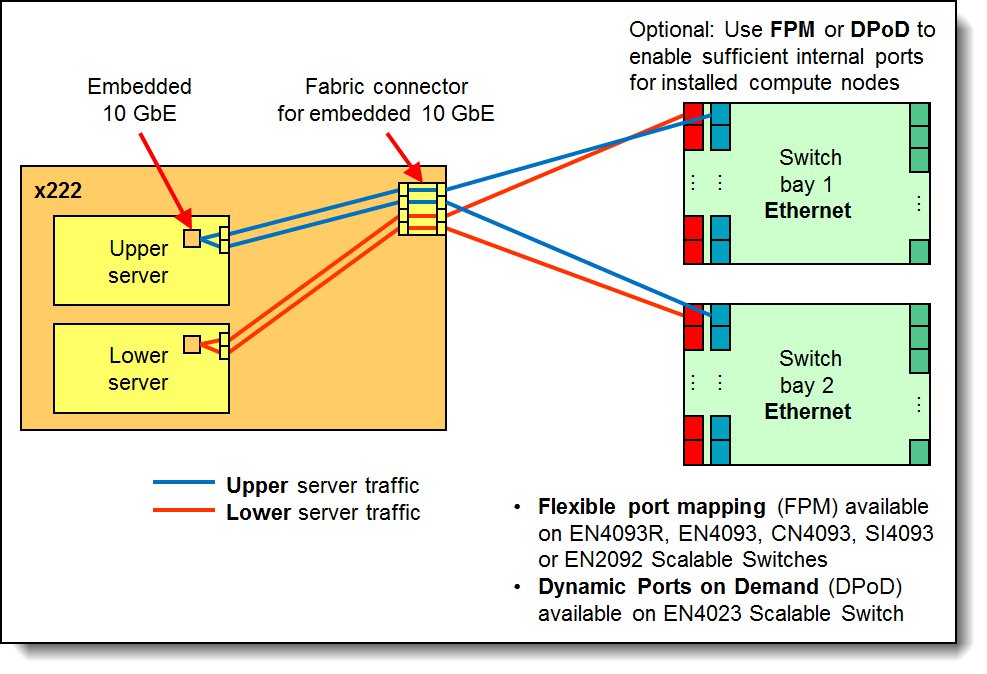 To support both servers in the x222 you will need sufficient internal ports, either by applying the relevant switch upgrade, or using flexible port mapping or Dynamic Ports on Demand to reconfigure the ports.

For a list of supported Ethernet switches, see the Supported switches section.

The following table lists the ordering information for the Features on Demand upgrade which enables the iSCSI and FCoE support on the Embedded 10Gb Virtual Fabric Adapter.

Two licenses required: To enable the FCoE/iSCSI upgrade for both servers in the x222 Compute Node, two licenses are required.

Table 7. Feature on Demand upgrade for FCoE and iSCSI support

* To enable the FCoE/iSCSI upgrade for both servers in the x222 Compute Node, two licenses are required.

In addition to the Embedded 10GbE VFAs on each server, the x222 supports one I/O adapter that is shared between the two servers and is routed to the I/O Modules that are installed in bays 3 and 4 of the chassis.

The shared I/O adapter is mounted in the lower server, as shown in the following figure. The adapter has two host interfaces, one on either side, for connecting to the servers. Each host interface is PCI Express 3.0 x16. 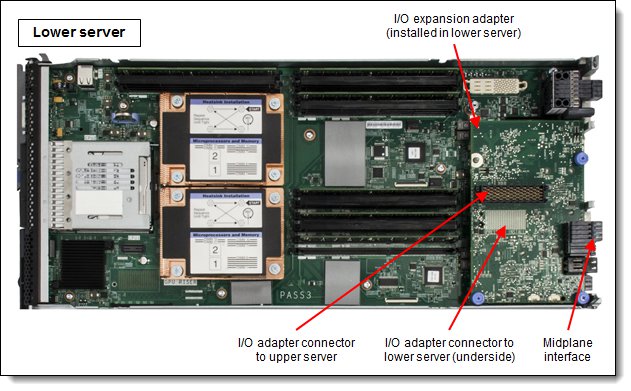 Figure 7. Location of the I/O adapter

The following table lists the supported network and storage adapter. Adapters are shared between the two servers with half the ports routing to each server.

A compatible switch module must be installed in the corresponding I/O bays in the chassis, as indicated in the following table. Installing four switches in all four switch bays of the chassis means that all ports of the adapter are enabled, which improves performance and network availability.

The following figure shows how the FC5024D 4-port 16 Gb FC adapter and the Embedded 10Gb VFAs are connected to the Ethernet and Fibre Channel switches installed in the chassis. 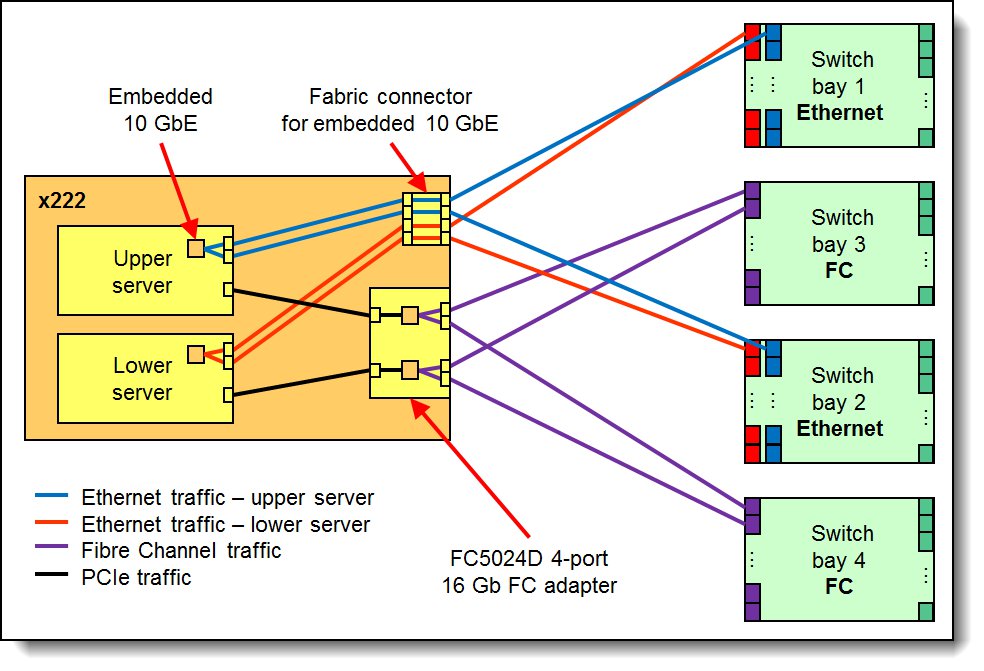 Figure 8. Logical layout of the interconnects - Ethernet and Fibre Channel

The following figure shows how the IB6132D 2-port FDR InfiniBand adapter and the four ports of the two Embedded 10 GbE VFAs are connected to the Ethernet and InfiniBand switches that are installed in the chassis. 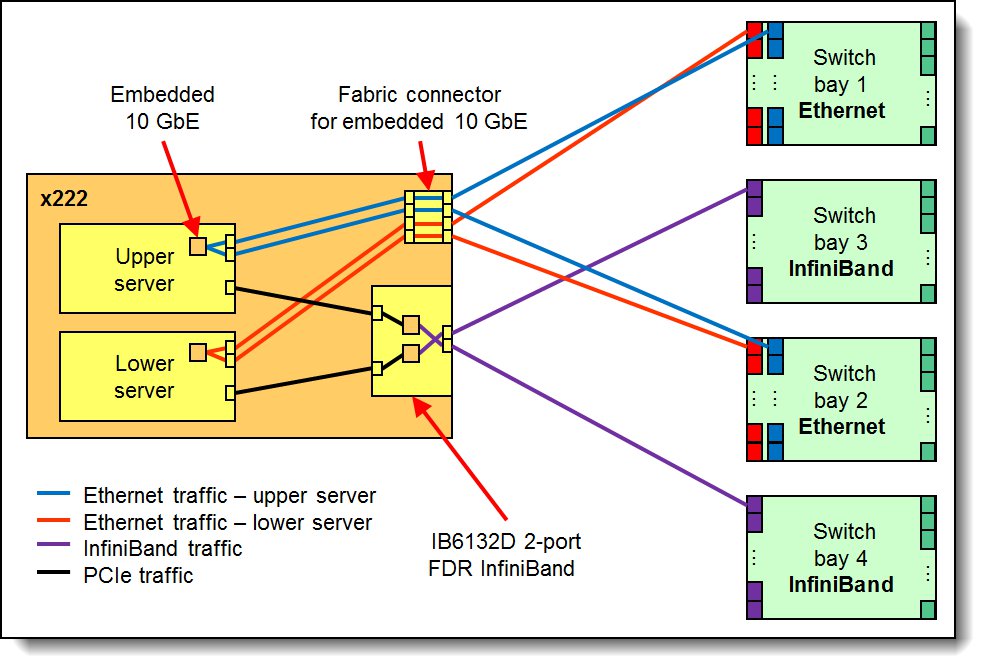 Figure 9. Logical layout of the interconnects - Ethernet and InfiniBand

The following table shows which Ethernet, Fibre Channel, and InfiniBand switches are supported:

* Withdrawn from marketing
** Product Guides for Flex System switches can be found at: https://lenovopress.com/servers/blades/networkmodule
† Product Guides for the Flex System FC5022 SAN Scalable Switch can be found at:
http://lenovopress.com/tips0870
‡ A switch upgrade is not required to activate the necessary ports. However, to run the ports at FDR speeds, you need the FDR upgrade 90Y3462.

The following switches are not supported by the x222 because they do not provide enough internal ports to connect to both servers in the x222 Compute Node:

Each server in the x222 supports the ESXi hypervisor on a USB memory key through two internal USB ports (see Figure 3). The supported USB memory keys are listed in the following table.

There are two types of USB keys: preload keys or blank keys. Blank keys allow you to download a Lenovo customized version of ESXi and load it onto the key. Each server supports one or two keys that are installed, but only certain combinations:

Installing two preload keys prevents ESXi from booting, as described at the website http://kb.vmware.com/kb/1035107. Having two keys that are installed provides a backup boot device. Both devices are listed in the boot menu, which allows you to boot from either device or to set one as a backup in case the first one becomes corrupted.

For quick problem determination when you are physically at the server, the x222 Compute Node offers a three-step guided path:

The two light path diagnostics panels on the x222 are visible when you remove the server from the chassis. One panel is for the upper server and one is for the lower server. 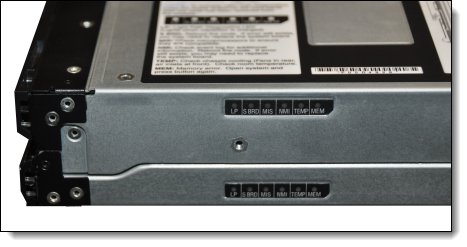 The meanings of the LEDs in the light path diagnostics panel are listed in the following table.

The two servers in the x222 each contain an Integrated Management Module II (IMM2), which interfaces with the advanced management module in the chassis. The combination of these features provides advanced service-processor control, monitoring, and an alerting function. If an environmental condition exceeds a threshold or if a system component fails, LEDs on the system board are lit to help you diagnose the problem, the error is recorded in the event log, and you are alerted to the problem. A virtual presence capability comes standard for remote server management.

The Flex System x222 server complies with ASHRAE Class A3 specifications when it is installed within the Flex System Enterprise Chassis.

Here is the supported operating environment:

The server conforms to the following standards:

The following terms are trademarks of Lenovo in the United States, other countries, or both:
Lenovo®
Flex System
Lenovo Services
ServeRAID
ServerGuide
System x®