Lenovo XClarity™ Administrator is a centralized resource management solution that is aimed at reducing complexity, speeding response, and enhancing the availability of Lenovo® server systems and solutions.

This product guide provides essential presales information to understand the Lenovo XClarity Administrator offering and its key features, specifications, and compatibility. This guide is intended for technical specialists, sales specialists, sales engineers, IT architects, and other IT professionals who want to learn more about Lenovo XClarity Administrator and consider its use in IT solutions.

Lenovo XClarity™ Administrator is a centralized resource management solution that is aimed at reducing complexity, speeding response, and enhancing the availability of Lenovo® server systems and solutions. 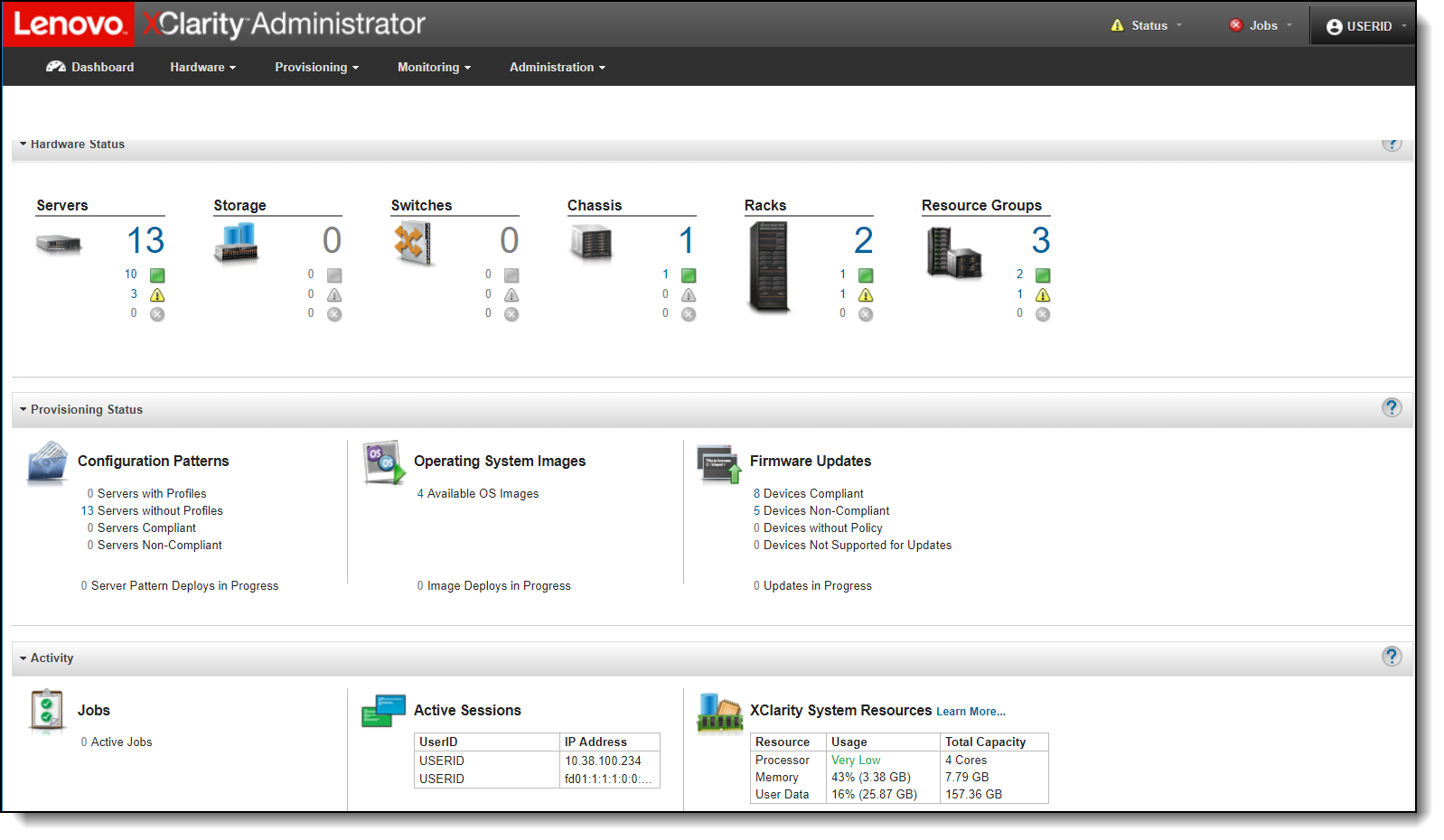 Lenovo XClarity offers a mobile app for Android and iOS devices. The app enables you to securely monitor physical systems, get real-time status alerts and notifications, and take action on common system level tasks. The app can also connect directly via an enabled USB port to a ThinkSystem server and provide virtual LCD capability.

The XClarity Administrator dashboard is an HTML 5-based web interface that allows fast location of resources so tasks can be run quickly. Because Lenovo XClarity Administrator does not include any agent software that is installed on the managed endpoints, there are no CPU cycles spent on agent execution and no memory is used, which means that up to 1GB of RAM and 1 - 2% CPU usage is saved, compared to a typical managed system where an agent is required.

Fast time to value is realized through automatic discovery of existing or new Lenovo rack servers and Flex System infrastructure. Inventory of the discovered endpoints is gathered, so the managed hardware inventory and its status can be viewed-at-a-glance.

Configuration management uses pattern-based configurations to quickly provision and re-provision a single server or multiple servers and compute nodes, all with a single set of configuration settings. Settings to configure include local storage, I/O adapters, boot order, and other baseboard management controller and UEFI settings on managed servers. Server patterns also integrate support for virtualizing I/O addresses, so you can virtualize server fabric connections or repurpose servers without disruption to the fabric.

Additionally, if the settings on a server change, you can determine the compliance status of each server from within the Configuration Patterns Server Profiles page and main dashboard.

OS Provisioning enables bare metal deployment. Images of the following operating systems and hypervisors can be imported and held in a repository for images:

Starting with XClarity Administrator v3.5.0 there is no longer a limit of 50GB or 10 images for to the number of OS images which can be stored within the repository, you can now continue to import images as long as there is sufficient free space within the OS images repository.

It is possible to deploy operating-system images to up to 28 bare-metal servers concurrently.

Lenovo XClarity Administrator includes several features that can help you secure your environment. These include:

XClarity Administrator can be integrated into external, higher level management, automation, and orchestration platforms using the XClarity Integrators, through SNMP and through open REST application programming interfaces (APIs). This means Lenovo XClarity can easily integrate with your existing management infrastructure.

Lenovo XClarity integrates with leading management applications in the areas of infrastructure management, orchestration and automation, and IT service management.

Available integrators include the following:

Lenovo XClarity Administrator is available for download from the following URL:
https://datacentersupport.lenovo.com/us/en/xclaritytrial

The following table compares features included with XClarity Administrator base and with addition of XClarity Pro license.

Support requirements are as follows:

The following figure shows the Inventory screen of the mobile app. 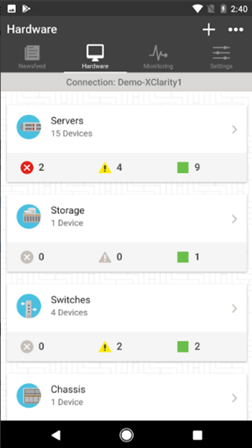 The mobile app is available for download from these app stores:

By using Lenovo XClarity Administrator, users can perform the following tasks that are described in this section. 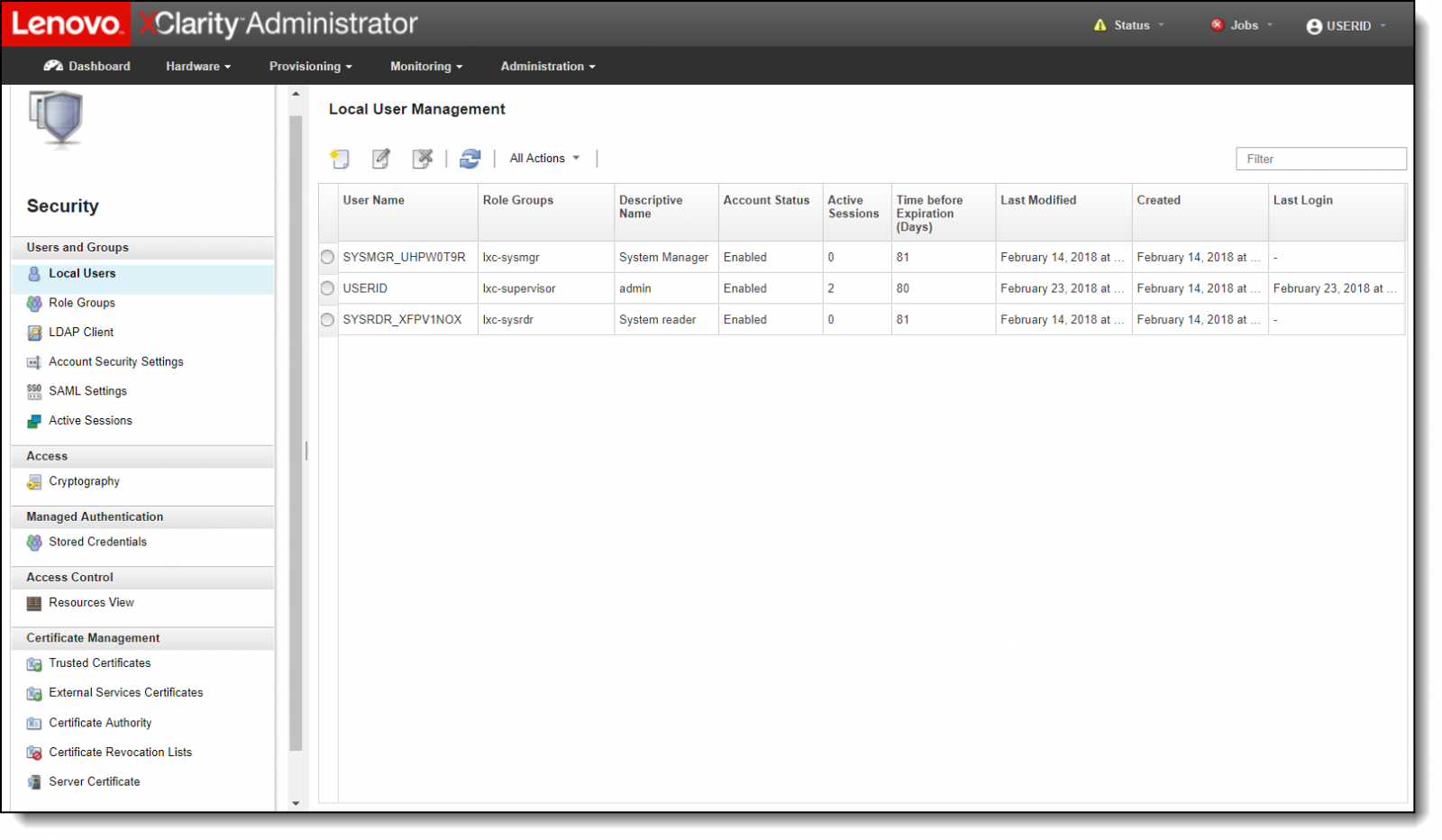 Lenovo XClarity Administrator provides a centralized view of events and alerts that are generated from managed endpoints, such as chassis components, servers, storage devices and network switches. When an issue is detected an event is passed to the Lenovo XClarity Administrator. That event is displayed in the alerts list that is available within the user interface. A status bar also is available that provides overall status information on the main XClarity Administrator interface. An example list of alerts is shown in the following figure. This view can be filtered to show specific alert severity. Additionally, the view can also be filtered by dates and alert sources or via the search filter.

There are various management tasks for each supported endpoint, including viewing status and properties, configuring system information and network settings, starting the CMM/BMC/IMM/XCC web interfaces, and remote control for the severs and Flex nodes. Note, the Feature on Demand (FoD) key for remote presence is required on ThinkSystem, ThinkAgile Solutions, NeXtScale, and System x servers if not included as standard. The options available for Power Actions on a selected ThinkSystem server is shown in the following figure. 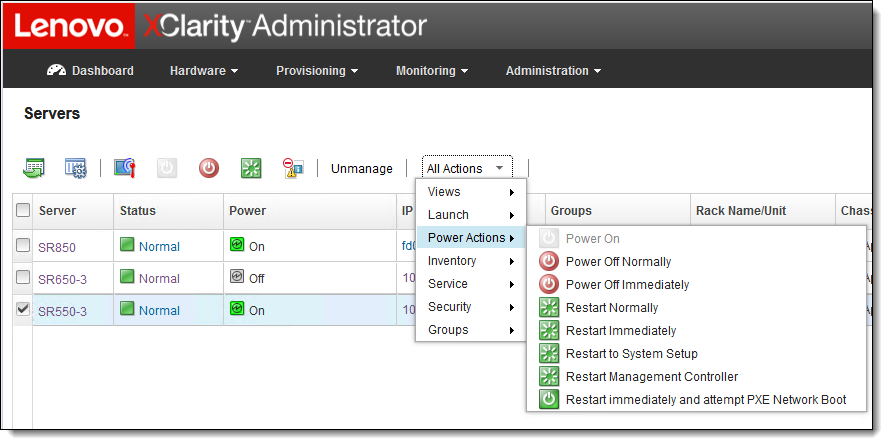 Configuration patterns provide a way to ensure that you have consistent configurations applied to managed servers. Server patterns are used to provision or pre-provision a managed server by configuring local storage, I/O adapters, boot setting, firmware, ports, IMM, and UEFI settings. Server patterns also integrate support for virtualizing I/O addresses so you can virtualize Flex System fabric connections or re-purpose servers without disruption to the fabric.

Lenovo XClarity Administrator can be used to manage the OS images repository and deploy operating system images to managed servers. To deploy an operating system image from Lenovo XClarity, at least one of the network interfaces (Eth0 or Eth1) must have IP network connectivity to the server network interface that is used to access the host operating system. It also must be configured with an IPv4 address. Note, the Feature on Demand (FoD) key for remote presence is required on ThinkSystem, ThinkAgile Solutions, NeXtScale, and System x servers if not included as standard.

Within Lenovo XClarity, you can manage the firmware updates repository and apply and activate firmware updates for managed endpoints. Compliance policies can be started to flag managed endpoints that do not comply with the defined firmware rules. Refreshing the repository and downloading updates requires an Internet connection. If Lenovo XClarity has no Internet connection, you can manually import updates to the repository. The firmware apply and activate interface is shown in the following figure.

Lenovo XClarity Administrator provides REST APIs and a PowerShell Toolkit, Python Toolkit and Ruby toolkit, which  can be used to generate scripts to automate management functions.

Lenovo XClarity Administrator PowerShell (LXCAPSTool) toolkit provides a library of cmdlets to automate provisioning and resource management from a Microsoft PowerShell session. The cmdlets use Lenovo XClarity REST APIs and can automate the following functions:

XClarity Administrator offers a PyLXCA toolkit which provides a Python-based library of commands and APIs to automate provisioning and resource management from an OpenStack environment, such as Ansible or Puppet.

The PyLXCA toolkit provides an interface to Lenovo XClarity Administrator REST APIs to automate functions such as:

Lenovo XClarity Administrator is available to download from Lenovo at the following link:

The free download includes a 90-day evaluation license for Configuration Patterns and Operating System Deployment to allow you to evaluate these licensed components.

Lenovo XClarity Integrators for Microsoft are also available to download for free from the following links (XClarity Pro License required for technical support):

Lenovo XClarity integrator for VMware is also available to download for free from the following link (XClarity Pro License required for technical support):

Each Lenovo XClarity Pro license provides the following entitlements for a single device (for details on which devices XClarity Administrator can managed see Supported Devices in the online help):

You must purchase a license for each managed device to be entitled to service and support. However, compliance is determined based on the number of managed devices that support the advanced functions. The license is not tied to a specific device.

The part numbers are listed in the following tables.

When you purchase XClarity Pro, the order is fulfilled via electronic software delivery (ESD) using the Lenovo Key Management System (LKMS). The order is placed onto LKMS using an email address for the end user who has ordered the code. This email address is where the Activation Code is sent in PDF format (the email will come from lkmsdev@lenovo.com). The recipient email address is the login to the LKMS system for administration and to manage the LKMS inventory.

The Activation code is redeemed via LKMS and the information about the end customer should be entered during the redemption process.

Licenses are installed using a license activation key file, in .KEY format or as a .zip file (which consists of multiple .key files). After you redeem licenses, you can create an activation key for all or a subset of your available licenses (Note this can only be done at the time of redemption), and then download and install the activation key in XClarity Administrator per instructions as described in Installing the full-function enablement license in the online help.

Note: The number of managed devices must not exceed the total number of licenses in all active license keys. If XClarity Administrator is not in compliance with the installed licenses (for example, if licenses expire or if managing additional devices exceeds the total number of active licenses), you have a grace period of 90 days to install appropriate licenses. Each time XClarity Administrator becomes non-compliant, the grace period resets to 90 days. If the grace period (including the free trial) ends before licenses are compliant, advanced functions are disabled for all devices.

The following table shows details on what happens to each of the premium functions on different versions of XClarity Administrator after the 90 day grace/evaluation period has expired. For more information, see the Installing the full-function enablement license in the online help.

Important: For Hyper-V environments that run on Linux guests with a 2.6 kernel base and that use large amounts of memory for the virtual appliance, you must disable the use of non-uniform memory access (NUMA) on the Hyper-V Settings Panel from Hyper-V Manager. Changing this setting requires you to restart the Hyper-V service, which also restarts all running virtual machines. If this setting is not disabled, XClarity Administrator virtual appliance might experience problems during initial startup.

The host system that is running the Lenovo XClarity virtual machine has the following minimum requirements. Depending on the size of your environment and your use of Configuration Patterns, additional resources might be required for optimal performance:

For more information about minimum hardware recommendations based on the number of managed devices in your environment, see the Lenovo XClarity Administrator Performance white paper:
https://download.lenovo.com/servers_pdf/Lenovo_XClarity_Performance_Guide_V3.5.0.pdf

XClarity Administrator supports the following endpoints. Click the links for support and limitations information for manageable devices (such as servers, switches, storage, and CMMs) and other I/O devices and options, see the following compatibility pages for each device type:

Azure®, Hyper-V®, Microsoft®, PowerShell, Windows Server®, and Windows® are trademarks of Microsoft Corporation in the United States, other countries, or both.

Migrating from 1.x? For moving to Lenovo XClarity Administrator v2.0.0 from a previous release (1.x.x) please refer to the following documentation:
http://sysmgt.lenovofiles.com/help/topic/com.lenovo.lxca.doc/setup_upgradelxca.html