This product guide describes the Storwize V7000 Storage System that is available from Lenovo. It also provides essential pre-sales information on Storwize V7000, its key features and specifications, components and options, and configuration guidelines.

Storwize V7000 storage controller units include two node canisters, each with 32 GB cache for a system total of 64 GB cache. Also available is an optional cache upgrade to 128 GB or 256 GB per system (64 GB or 128 GB per node canister). Standard is 1 Gb iSCSI connectivity, with an option for 8 Gb (Model 524 only) or 16 Gb Fibre Channel (FC), 10 Gb iSCSI or Fibre Channel over Ethernet (FCoE), or 25 Gb iSCSI (Model HC1 only) connectivity.

A single Storwize V7000 system can be scaled up to 7.74 PB of raw storage capacity. With external virtualization, the system can manage in total up to 32 PB.

The following 2.5-inch drives are supported:

All drives are dual-port and hot-swappable. Drives of the same form factor can be intermixed within the appropriate enclosure, which provides the flexibility to address performance and capacity needs within a single enclosure.

More drives and expansion units are designed to be dynamically added with virtually no downtime, which helps to quickly and seamlessly respond to ever-growing capacity demands.

The V7000 storage system offers high levels of system and data availability with the following technologies:

The following figure shows the front of the Storwize V7000 SFF enclosure.

The following figure shows the front of the Storwize V7000 LFF enclosure.

The following figure shows the rear of the Storwize V7000 Controller Unit. 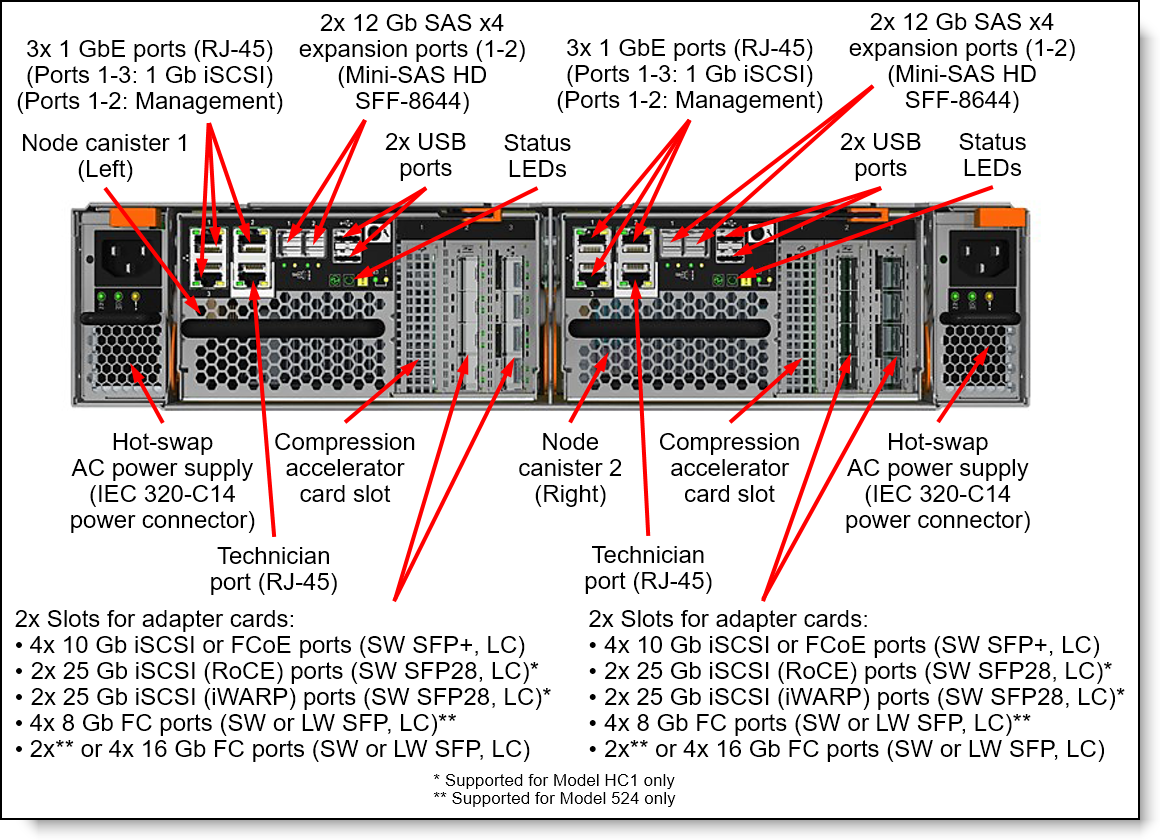 The following figure shows the rear of the Storwize V7000 Expansion Unit. 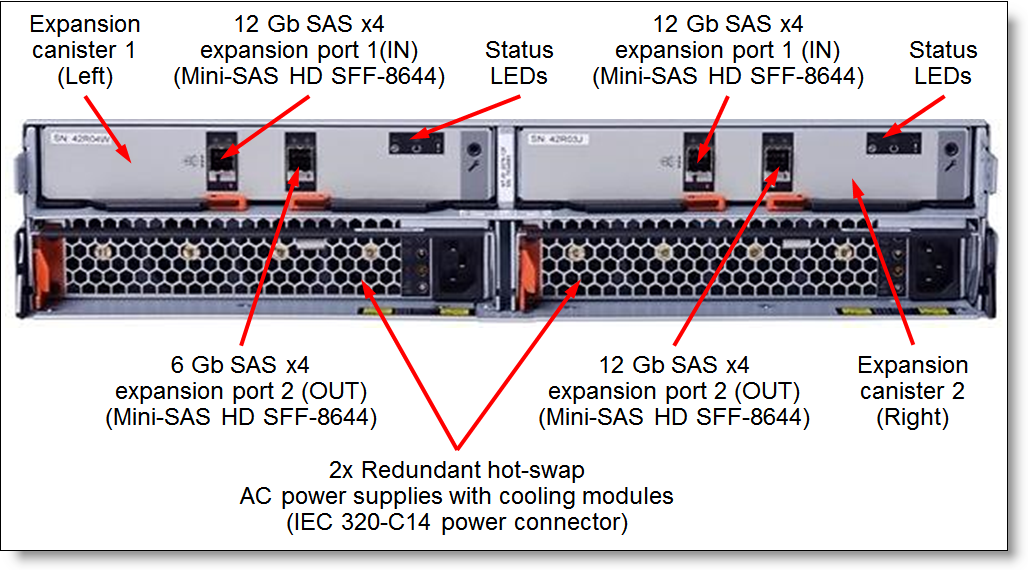 Note: The supported hardware options and software features listed in this product guide are based on the Spectrum Virtualize software version 8.1.3 (Model HC1) or 7.8.1.1 (Model 524). Model 524 does not support software versions 8.x onwards. For details about specific Spectrum Virtualize software releases that introduced support for certain hardware options and software features, refer to the Release notes of the particular software release that can be found at:
http://datacentersupport.lenovo.com/us/en/products/storage/storwize/v7000/downloads

* Supported for Model 524 only.
# Supported for Model HC1 only.
^ The operating systems shown are for Lenovo servers. The V7000 might support other operating systems. For a full list of supported operating systems, refer to the System Storage Interoperation Center: http://ibm.com/systems/support/storage/ssic.
** Internal performance measurements for Model HC1 with SSDs.
*** For a detailed list of configuration limits and restrictions for a specific version of the Storwize V7000 software, see the following online document: http://www.ibm.com/support/docview.wss?uid=ssg1S1003741

Product availability: The Storwize V7000 controller units are withdrawn and no longer available for ordering.

The part numbers for the Storwize V7000 controller unit include the following items:

Note: Power cables are not included and must be ordered separately (for more information, see Power cables).

The Storwize V7000 controller unit must be configured with at least one pair of the adapter cards that supply the following interfaces:

The Storwize V7000 supports attachment of up to 20 Storwize V7000 SFF or LFF Storage Expansion Units. Intermix of SFF and LFF expansion units is supported. The expansion enclosures can be added to the system non-disruptively.

The following table lists the models of the Storwize V7000 SFF and LFF expansion units.

* Feature codes for System unit base hardware / Base software / Software support and subscription.

The part number for the Storwize V7000 expansion enclosures includes the following items:

Note: Power cables are not included and must be ordered separately (for more information, see Table 13).

The expansion enclosure connectivity topology is shown in the following figure. 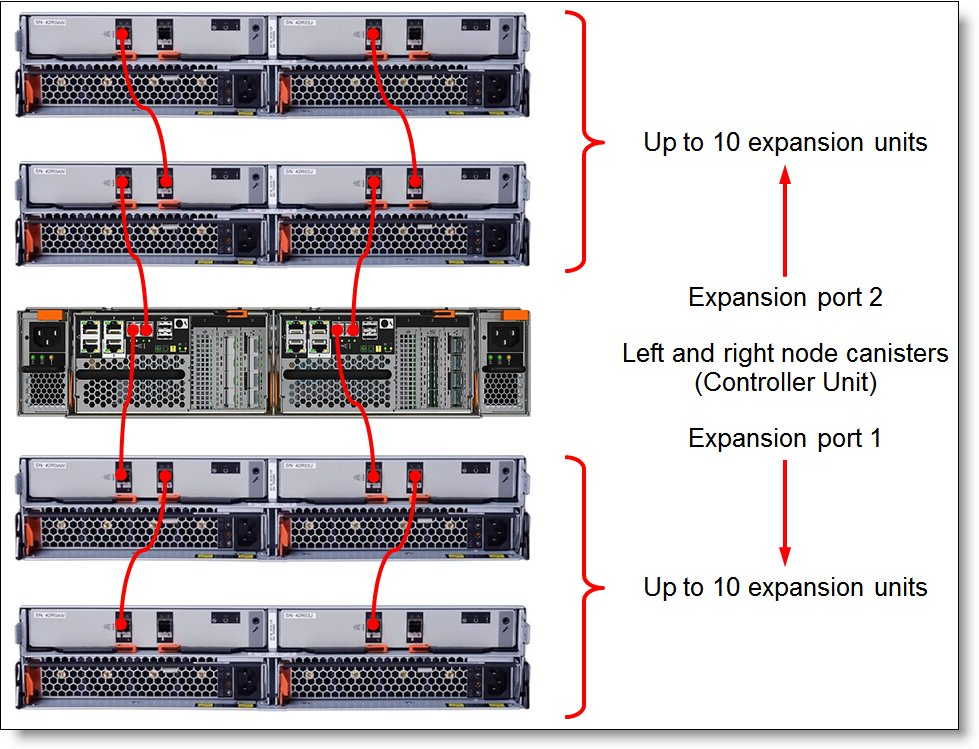 The following functions are included with every Storwize V7000:

* The bundle option includes Easy Tier, FlashCopy, Remote Mirroring, and Real-time Compression licenses.
** One license for each storage enclosure that is attached to, and externally managed by, the Storwize V7000.

* The bundle option includes Easy Tier, FlashCopy, Remote Mirroring, and Real-time Compression licenses.
** One license for each storage enclosure that is attached to, and externally managed by, the Storwize V7000.

Note: A storage enclosure that is externally managed by the Storwize V7000 is defined as an independently powered, channel-attached device that stores data on magnetic disks or SSDs, such as disk controllers and their respective expansion units, each of which constitutes separate enclosures. Therefore, an enclosure can be the main controller housing disk or SSDs, or the expansion chassis that houses extra disk or SSDs for the purpose of expanding the total capacity of the storage system.

The following table lists ordering information for the encryption options.

Note: The Storwize V7000 Encryption Enablement feature and the Encryption USB Drive Pack feature (machine type and feature numbers) are not available in the following countries:

The Storwize V7000 storage controller and expansion units have the following dimensions and weight (approximate):

The Storwize V7000 units are supported in the following environment:

Some countries might have different warranty terms and conditions than the standard warranty. This is due to local business practices or laws in the specific country. Local service teams can assist in explaining country-specific terms when needed. Examples of country-specific warranty terms are second or longer business day parts delivery or parts-only base warranty.

If warranty terms include parts-only base warranty, Lenovo is responsible for delivering only replacement parts that are under base warranty (including FRUs) that will be sent to a requested location for self-service. Parts-only service does not include a service technician being dispatched onsite. Parts must be changed at customer’s own cost and labor and defective parts must be returned following the instructions supplied with the spares parts.

In general, the following Lenovo warranty service upgrades are available:

The Storwize V7000 conforms to the following regulations:

Note: Tables that are provided in this section are for ordering reference purposes only.

Currently available converged FCoE/iSCSI adapters for Lenovo servers that are compatible with Storwize V7000 are listed in the following table. Other HBAs also might be supported (see the SSIC for details).

Currently available FC adapters for Lenovo servers that are compatible with the Storwize V7000 FC storage are listed in the following table. Other FC adapters also might be supported (see the SSIC for details).

The following table lists currently available Ethernet and FC rack-mount switches that are offered by Lenovo that can be used in Storwize V7000 storage solutions.

The following table lists currently available Ethernet and FC embedded switches and pass-thru modules for Flex System that can be used in Storwize V7000 storage solutions.

The following table lists the rack cabinets that are offered by Lenovo that can be used in Storwize V7000 storage solutions.

For more information, see the list of Product Guides in the Rack Cabinets category:
http://lenovopress.com/servers/options/racks

The following table lists the power distribution units (PDUs) that are offered by Lenovo that can be used in Storwize V7000 storage solutions.

The following table list the uninterruptible power supply (UPS) units that are offered by Lenovo that can be used in Storwize V7000 storage solutions.

For more information about your region-specific offers, contact your Lenovo sales representative or your technology provider about the use of Lenovo Financial Services. For more information, see the following Lenovo website: http://www.lenovofs.com

The following terms are trademarks of Lenovo in the United States, other countries, or both:
Lenovo®
AnyFabric®
Flex System
Lenovo Services
RackSwitch
System x®
ThinkServer®
ThinkSystem®

Excel®, Internet Explorer®, Microsoft®, Windows Server®, and Windows® are trademarks of Microsoft Corporation in the United States, other countries, or both.