The System x3100 M5 single-socket tower server is designed for small businesses and first-time server buyers looking for a solution to improve business efficiency. It delivers several innovative features with a competitive price, either in a compact mini-tower form factor, or standard tower form factor with hot-swap power supplies and disk drives.

This product guide provides essential pre-sales information to understand the x3100 M5, their key features and specifications, components and options, and configuration guidelines. This guide is intended for technical specialists, sales specialists, sales engineers, IT architects, and other IT professionals who want to learn more about x3100 M5 and consider its use in IT solutions.

Changes in the September 11 update: 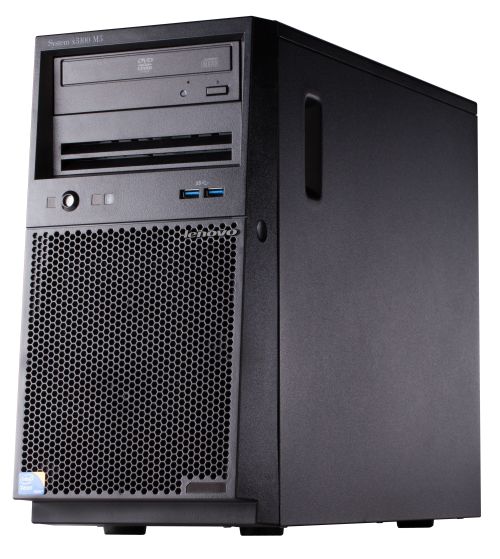 The System x3100 M5 server is a compact, cost-effective, single-processor tower or rack-mountable server that has been optimized to provide outstanding availability, manageability, and performance features to small-to-medium-sized businesses, retail stores, or distributed enterprises. It supports the Intel Xeon E3-1200 v3 “Haswell” family of processors for applications that require performance and stability, and Core i3, Pentium, and Celeron processors for applications that require lower cost.

The system includes features that are not typically seen in this class of system, such as standard, embedded RAID 0 and RAID 1, remote control capabilities even when the machine is powered off, and Predictive Failure Analysis (PFA) on processor and memory. Some models also support hot-swap redundant power supplies and hot-swap disk drives.

Often, small-to-medium sized businesses (SMBs) have limited IT budget and resources, and rely on partners or multitalented employees to help manage the company’s network. Business needs for efficiency improvement and retention of critical data require the usage of a server that is easy to get up and running quickly and is dependable. You need to squeeze as much as possible out of your IT dollars while saving costs on features that are not needed in an SMB environment. The System x3100 M5 is an ideal first server to meet those business needs. It was built for speed, yet eliminates costly design features that are found in general-purpose servers that are unnecessary for smaller businesses.

The x3100 M5 provides many features to simplify serviceability and increase system uptime:

The x3100 M5 offers the following energy-efficiency features to save energy, reduce operational costs, increase energy availability, and contribute to a green environment: 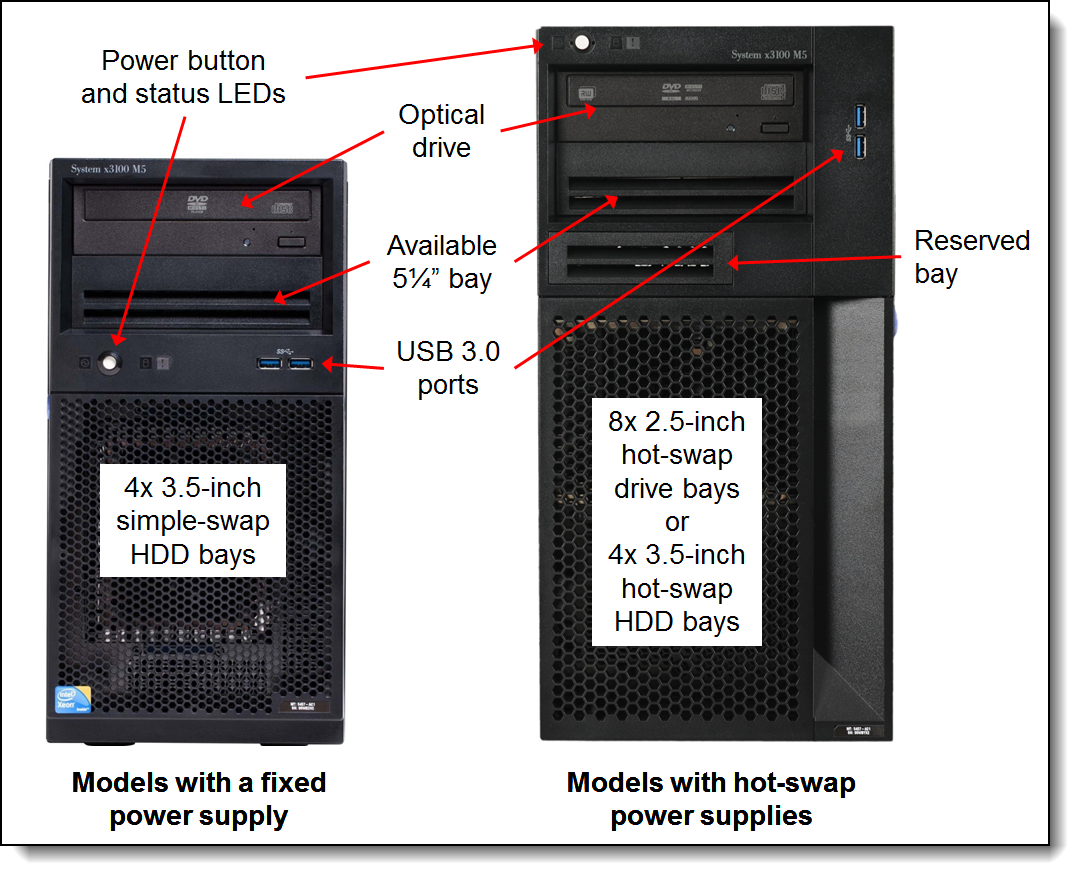 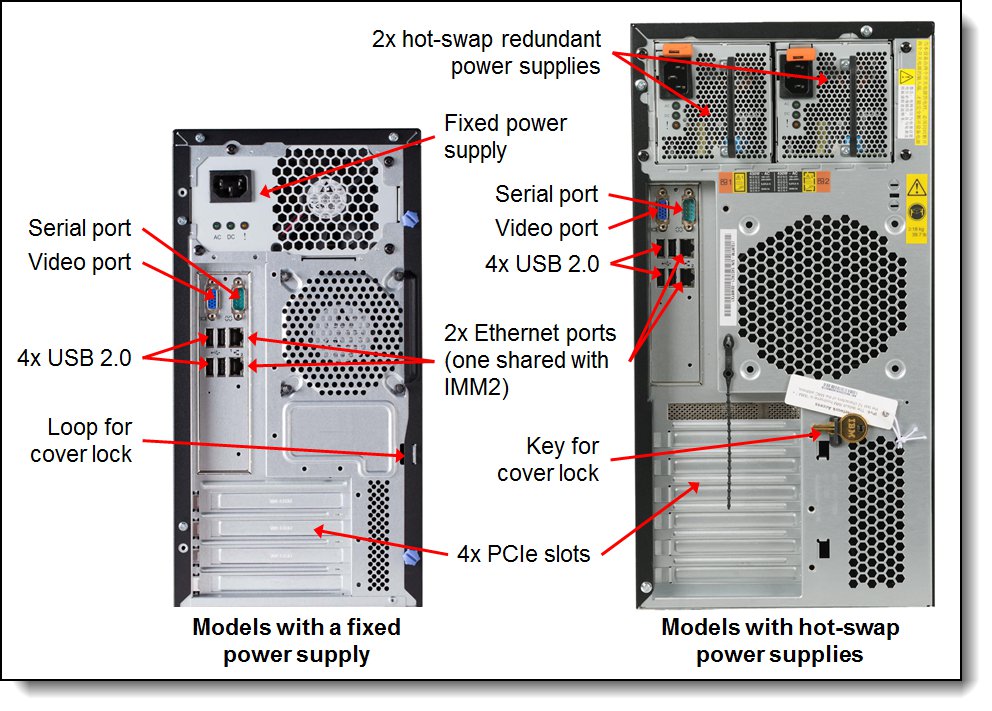 Figures 4 and 5 show the locations of key components inside the server. 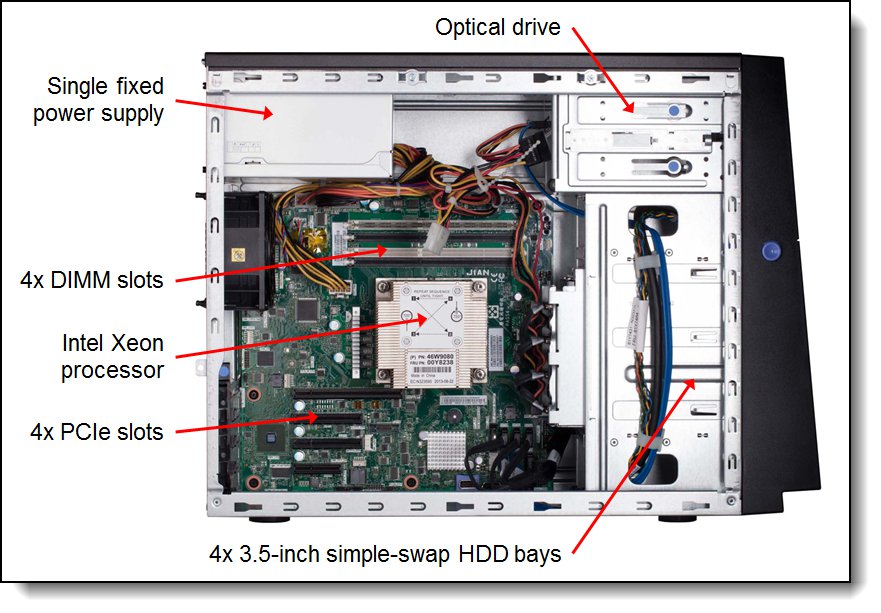 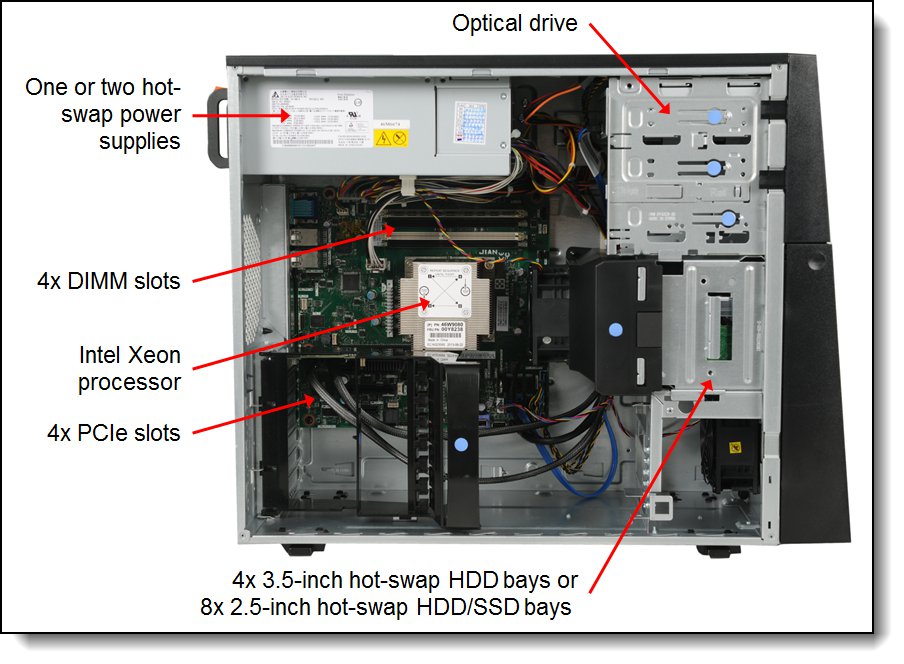 TopSeller and Express models are preconfigured with additional components, such as processors, memory, and disks with the purpose of making the ordering and installation process simpler.

The following tables list the Express and TopSeller models that are available in certain regions:

The following table lists the Express and TopSeller models with standard tower form factor (hot-swap HDDs and power supplies) that are available in certain regions.

The server supports only one processor, which is already installed in all standard and Express models. No additional processor options are available. The following table lists all processors that are available in standard models of x3100 M5 or through configure-to-order (CTO). If there is no corresponding where-used model for a particular processor, then that processor is only available through the CTO process or special bid.

The x3100 M5 has four DIMM slots, and only DDR3 ECC UDIMMs are supported. The CPU has two memory channels, and there are two DIMMs per channel.

Configuration rules: If you plan to install more than one DIMM, then the DIMMs must be installed in a pair, and both DIMMs in a pair must be identical in type and size.

The following table lists the memory options that are supported by the server.

Models of the x3100 M5 with the compact tower form factor (and either a 300 W or a 350 W fixed power supply) support up to four 3.5-inch simple-swap SATA hard disk drives, as shown in the following figure. 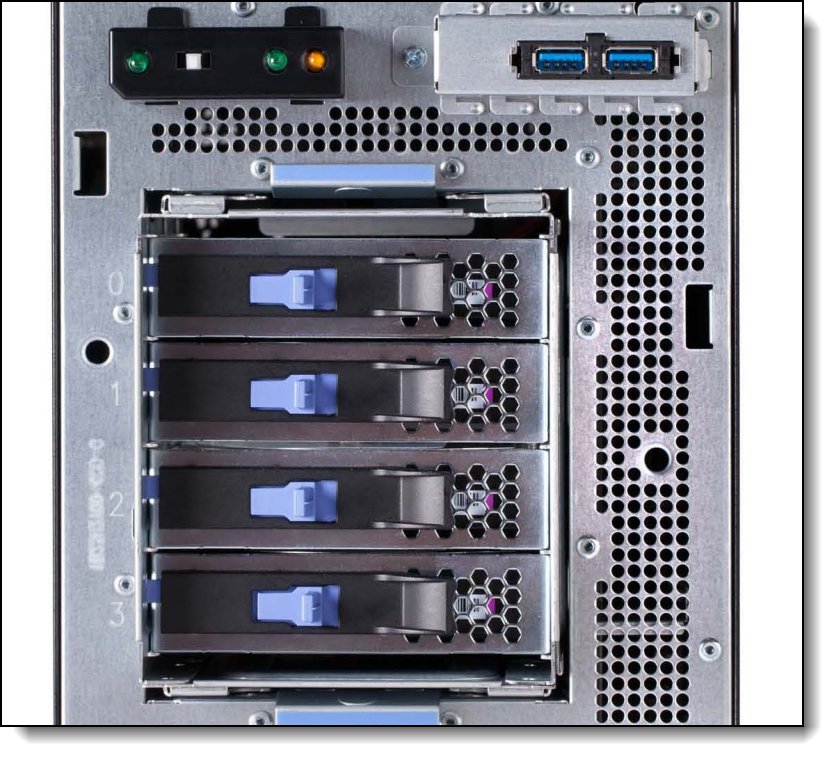 The following table lists the RAID controller and internal HBAs that are supported by the server.

The following table lists the supported upgrades to the internal RAID controllers and HBAs.

The drives supported depend on the chassis selected.

The x3100 M5 with the compact tower form factor (and either a 300 W or a 350 W fixed power supply) supports 3.5-inch simple-swap hard disk drive options that are listed in the following table.

The standard tower chassis (and with hot-swap 430 W power supplies) supports the 2.5-inch and 3.5-inch drive options drives listed in the following two tables. Hot-swap SATA HDDs and hot-swap SAS HDDs can be intermixed, but not in the same array.

The server supports the optical drive options that are listed in the following table.

* This option is only available through CTO or is already installed in standard models.

The Half-High SATA DVD-ROM supports the following media and speeds for reading:

The server offers four PCI Express expansion slots. The form-factors of available slots are as follows. This applies to both the compact tower chassis and the standard tower chassis.

* Require SFP+ optical transceivers or DAC cables that must be purchased separately. See the following table.

The following table lists the supported 10 Gb Ethernet SFP+ optical transceivers and DAC cables. For multi-port adapters, all adapter ports must have the same type of transceiver or DAC cable selected.

The server does not support PCIe Flash Storage Adapters.

Standard tower models offer one or two hot-swap 430 W ac power supplies, which are 80 PLUS Silver certified. For models with only one power supply, the part number to order a second power supply is listed in the following table. Two power supplies that are installed form a redundant pair.

The following table lists line cords and rack power cables that can be ordered, if needed.

* These power cords are available configure-to-order (CTO) only

Both the compact tower design (with a single fixed power supply) and the standard tower design (with hot-swap power supplies) come with one or two speed-controlled non-redundant fans, model dependent (see Table 2). The second fan is required if two or more adapters are installed, and the fan is configured by selecting the appropriate Thermal Solution Fan Kit, as listed in the following table.

If you want to operate the server in an environment up to 40°C (104°F), use the optional Operating Temperature Enhancement Kit that is listed in the table. This kit contains an additional thermal sensor.

The server contains Integrated Management Module II (IMM2), which provides advanced service-processor control, monitoring, and an alerting function. If an environmental condition exceeds a threshold or if a system component fails, the IMM2 lights LEDs to help you diagnose the problem, records the error in the event log, and alerts you to the problem. Optionally, the IMM2 also provides a virtual presence capability for remote server management capabilities.

Important: The onboard ServeRAID C100 RAID controller is not supported by virtualization hypervisors, including VMware vSphere (ESXi), Linux KVM, Xen, and Microsoft Hyper-V.

For more information about Lenovo warranty service upgrade offerings that are available in your region, go to the Data Center Advisor and Configurator website http://dcsc.lenovo.com, then do the following:

The server supports attachment to external drive enclosures using a RAID controller with external ports or a SAS host bus adapter. Adapters supported by the server are listed in the SAS adapters for external storage section.

The following table lists the 6 Gbps SAS external drive enclosures that are offered by Lenovo that can be used with the server for storage expansion.

The following table lists the 12 Gbps SAS external drive enclosures offered by Lenovo that can be used with the server for storage expansion.

Note: Information provided in this section is for ordering reference purposes only. For the operating system and adapter support details, refer to the interoperability matrix for a particular storage enclosure that can be found on the Lenovo Data Center Support web site:
http://datacentersupport.lenovo.com

The following table lists the external backup options that are offered by Lenovo.

For more information, see the list of Product Guides in the Backup units category:
https://lenovopress.com/servers/options/backup

The following table lists the Ethernet LAN switches that are offered by Lenovo.

For more information, see the list of Product Guides in the following switch categories:

† Only available in China and the Asia Pacific market.

The server supports the rack cabinets that are listed in the following table. One of the tower-to-rack conversion kits is required for the server to be installed in the rack.

For more information, see the list of Lenovo Press Product Guides in the Rack cabinets and options category:
https://lenovopress.com/servers/options/racks